Straight off the bat, props go to stat junkies My Football Facts and the always excellent EPL Talk for putting the hard yards in on this one.

With every yellow and red card totted up and averaged by the number of seasons each club has spent in the Premier League’s inception in 1992/93, the guys over at EPL have produced these spiffing tables to illustrate just who are the dirtiest, most low-down filth merchants in Premier League history – or something like that – and the result is fairly surprising… 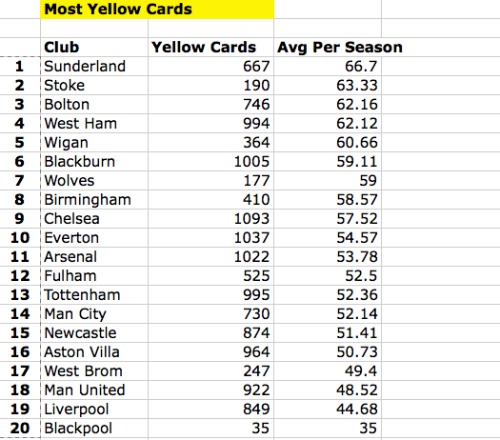 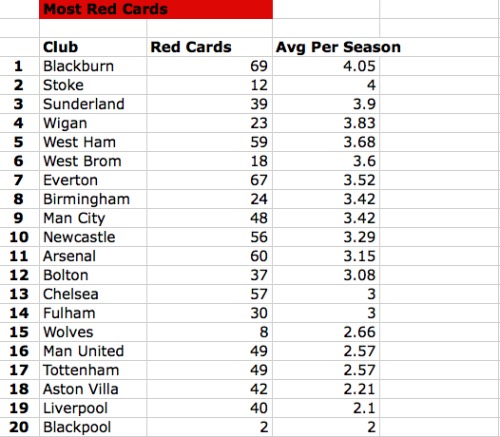 The ‘totals table’ was calculated by taking the number of red cards for each club and multiplying it by two, on the basis that one dismissal is the equivalent of two yellow cards.

Another point was then added to each club’s tally for each yellow card they have incurred over their time in the Premier League – thus producing a ‘total points scored’ column and providing us with a concise method of determining which are the dirtiest (and, by-proxy, the cleanest) teams in Premier League history… 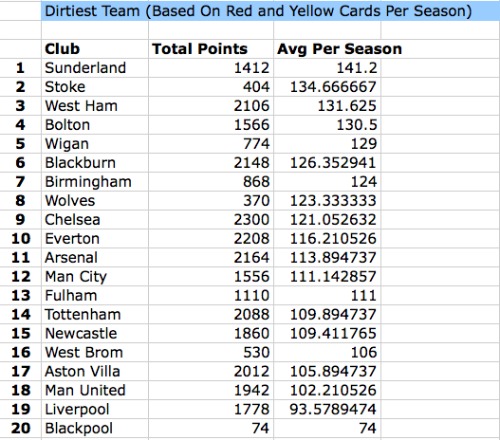 Sunderland, the dirty beggars. Who’d have thought? I had Bolton earmarked for some Allardyce-infused reason.

In the interests of fairness, it’s perhaps worth mentioning that teams like Blackpool have low averages due to their relative paucity of terms in the top tier, whereas several clubs (though not Sunderland) have been plying their trade in the Premier League for the full 19 year haul.

Once again, thanks to EPL Talk for the tables – you guys positively hum with awesomeness.