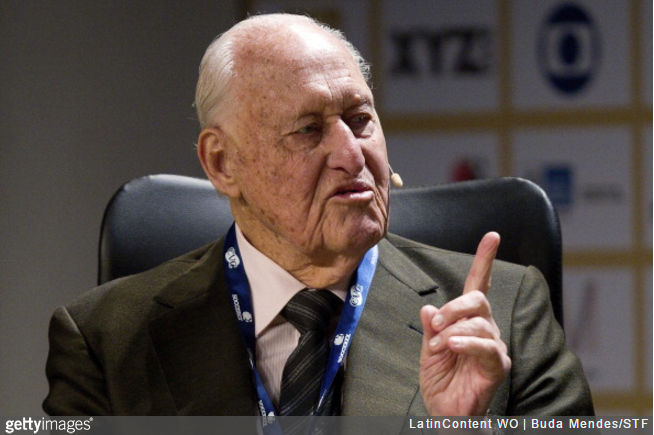 Without wishing to be unduly disrespectful to the man, Pies were labouring under the illusion that he’d shuffled off years ago, but nay – former FIFA president Joao Havelange has passed away today at the grand old age of 100.

Havelange served as FIFA’s grand poobah for 24 years between 1974 and 1998, at which point he was superseded by dear old Sepp Blatter.

He stepped down as FIFA’s honorary president in 2013 following an obligatory investigation into bribery allegations.

Having studied law as a young man, Havelange represented his native Brazil as a swimmer at the 1936 Olympics before being elected to the International Olympic Committee board on which he served until he was forced to resign in 2011 due to ill health.

He also enjoyed the esteem honour of being played, on screen – magnificently we might add – by Sam Neil in ‘United Passions’. You see the resemblance.

Here’s our Joao in days of yore, bestowing Pele with some made-up trophy for scoring 1,000 career goals…