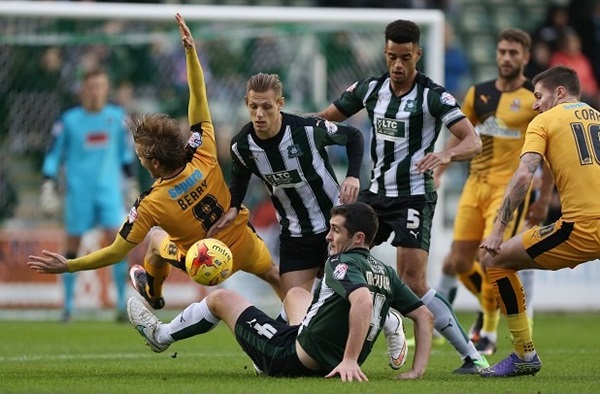 Plymouth Argyle found themselves bumped down from second to third place in League Two on Saturday afternoon after succumbing to mid-table Cambridge United in the final few minutes of the game.

With the scores level at 1-1 going into the last knockings of the match, an unfortunate slip from Plymouth defender Peter Hartley allowed Cambridge in to score the winner in the 86th minute at Home Park.

However, Argyle boss Derek Adams flatly refused to accept Hartley was culpable for the defeat, instead blaming the pitch itself – the footballing equivalent of a mother smacking the ‘naughty slide’ their toddler has just fallen off.

[We have] an algae on the pitch, it has to be treated and hopefully that will be sorted in the week. That is the reason.

According to Argyle chief executive Martyn Starnes, the algae has run amok at Home Park due to the wet and unusually warm weather that Plymouth has been subjected to over the past couple of months.

As such, the club have taken soil samples and are hoping that local pedology experts will be able to rid the playing surface of the greasy green growth.

We’ve got to get some equipment on there to try to break the algae up and put some winter seed in to try to take over.

It really is astonishing how scientific these pitches are nowadays.

It’ll be ready for the next game.whether we’ll see a tangible improvement by then is doubtful as it takes some time, but the pitch will be playable by the time Yeovil come on Boxing Day.

Over the next few weeks we expect a demonstrable improvement in the pitch.