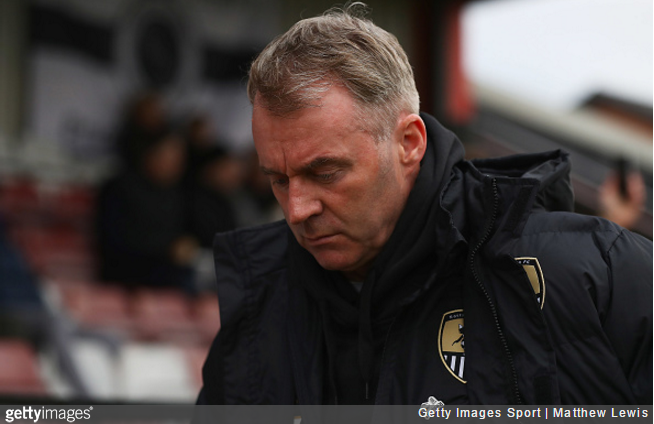 Notts County owner Alan Hardy has torn into John Sheridan, the manager he sacked in January, over the latter’s decision to appeal his dismissal for gross misconduct.

Having first heard of the appeal through the League Manager’s Association (LMA), Hardy has now openly accused Sheridan of attempting to ride roughshod over the “concept of respect in football” after canning the 52-year-old for embarking on an extraordinary, expletive-laden tirade at the match officials during County’s defeat against Wycombe back in mid-December.

As per the match report of referee Eddie Ilderton, Sheridan began by trampling out of his technical area to barrack linesman Anthony Moore in the 55th minute, immediately after Wycombe scored the second goal of their 2-0 win at Meadow Lane.

Fourth official Matthew Donahue then called Inderton over to order an irate Sheridan to return to his dugout, at which point the County boss bellowed directly into the referee’s face:

You’re a f**king disgrace. You’re f**king useless. You’ve not f**king got anything right today. You should be f**king ashamed.

You’re f**king shit. My kids aren’t going to get any f**king Christmas presents because of f**king you.

After making the comments public, The FA slapped Sheridan, who has since taken over at Oldham, with a five-match touchline ban.

In conjunction with the LMA, he is now appealing the process used to remove him from his post at County.

However, in a statement released to the Press Association today, Hardy has given both Sheridan and the LMA both barrels for having the temerity to launch an appeal despite the “scandalous” manner in which Sheridan acted.

I was astonished to receive notification from the LMA that Mr Sheridan has decided to appeal his dismissal.

We have sent back an extremely robust five page document re-affirming the transparent reasons behind our course of action.

The conduct shown by Mr Sheridan towards the match officials in this instance was nothing short of scandalous.

I am not prepared to tolerate any member of my staff abusing referees and officials in this manner.

I fully appreciate that the LMA have a duty of care to represent their membership. But surely even a professional body like the LMA realise they are being asked to defend the indefensible.

Mr Sheridan clearly believes this ‘industrial language’ is used in everyday workplaces. Not in my place of work, it’s not. And nor at my football club.

The FA clearly felt that it was a case of the gravest nature. A five-match touchline ban is one of the lengthiest and strongest punishments they have issued to any manager this season.

For me, this is not just about John Sheridan, the LMA and Notts County. This case has much wider significance and repercussions for the English game as a whole.

Over the past years, the FA have instigated a series of very admirable ’Respect’ initiatives designed to improve conduct across the game. I’d think we’d all agree that excellent progress has been made but that much more clearly still needs to be done.

Mr Sheridan and the LMA are effectively trying to run a coach and horses through the concept of respect in football. Potentially, they can set us back years if they continue to appeal the decision.

Hear hear. Nice to see an owner vehemently sticking up for the fundamental principles of acceptable conduct he wants to instil at his football club.