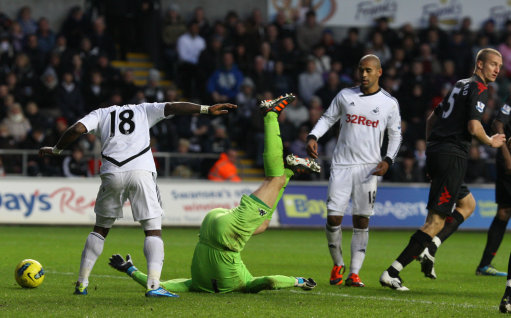 Fulham ‘keeper Mark Schwarzer buries his head in the sand

Unquestionably one of the surprise stars of the season so far, Swansea goalkeeper Michel Vorm was once again in superb form on Saturday against a talented Fulham side.

The Dutch glovesman, who cost just £1.5million from Utrecht, made a number of superb saves, including one from Clint Dempsey’s spot-kick to rack up another clean sheet and help Swansea to victory.  Scott Sinclair opened the scoring for the home side just before the hour mark, after his shot was deflected past Fulham ‘keeper Mark Schwarzer by Dempsey. Danny Graham made it two in stoppage time, but only after the Cottagers had severely tested man of the match Vorm.