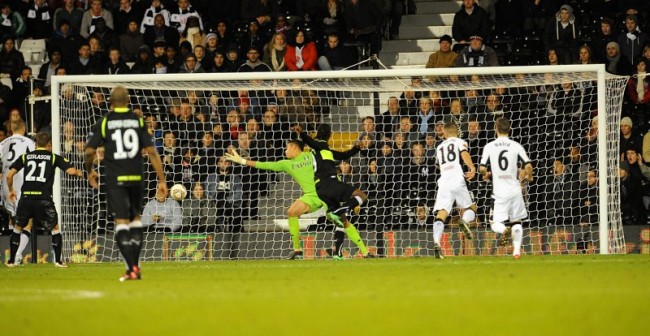 Fulham were dumped out of the Europa League with the very last touch of the game when Odense slung in a deep cross and substitute Baye Djiby Fall nodded in an equaliser at the far post with roughly four seconds left to play (the referee blew for full-time during the goal celebration), thus robbing the Cottagers of the points they needed to edge out Wisla Krakow, who beat table-toppers FC Twente on the night to finish second in Group K -just one point ahead of Martin Jol’s side.

Goals from Clint Dempsey and a first senior strike from the lively Kerim Frei had Fulham 2-0 up at the interval, but Odense pulled one back on the hour mark through Hans Henrik Andreasen’s sneaky free-kick, before late sub Orlando Sa failed to keep hold of it in the Dane’s half with the clock ticking over, Espen Ruud pinched it and humped a salvo into the box for Fall to bugger everything up for the West Londoners in the 93rd-minute.

More than a little worrying was Bobby Zamora’s body language over the course of the evening. With rumours of a rift with Jol abound, Zamora looked well and truly narked, especially after being taken off (despite having played 89 minutes). Is it just me or is the January window beginning to loom ominously?

Any road up, if there is a shred of positivity to take from the evening for Fulham, at the very least they preserved their unbeaten European home streak, which now stands at a very healthy 23 games. Very comforting, I’m sure!