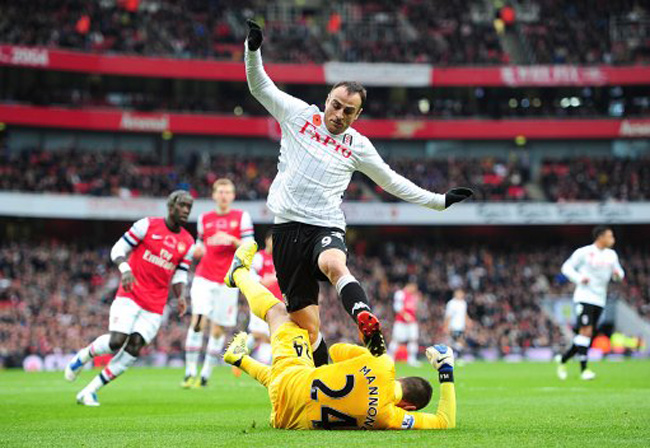 Arsene Wenger’s struggling Gunners threw away their second two-goal lead in less than a week, as a vibrant Fulham side, inspired by the superb Dimitar Berbatov, secured a well-deserved draw at the Emirates.

Goals from Olivier Giroud and Lukas Podolski had put the Gunners in the driving seat, with Theo Walcott impressing on the right. However, Berbatov and then Alex Alex Kacaniklic (courtesy of a Bernatov assist) levelled the scores by half-time after some more woeful defending from Arsenal. The first goal in particular was a shocker, with a stationary Berbatov able to nod home a corner from six yards, totally unchallenged.

After the break Mikel Arteta dallied on the edge of his own box before bringing down Bryan Ruiz inside the area, with that man Berbatov stroking home the subsequent spot-kick. Giroud did level the scores again after more good work from Walcott, but despite Arteta missing a last minute penalty (after a dubious handball decision), the Gunners got what they deserved as Arsene Wenger’s side continue their miserable start to the season.

As for Martin Jol and co, they don’t seem to be missing Clint Dempsey and Moussa Dembelé one jot.