Busy, busy, busy. Here’s the round up… 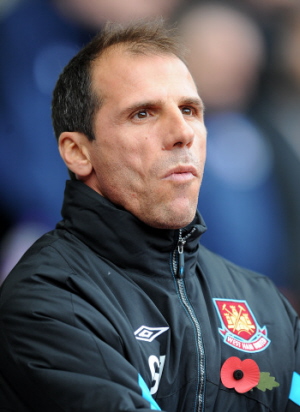 Rumour No. 1: Gianfranco Zola has confirmed that Benni McCarthy will be a West Ham player by the end of the transfer window and that he is also keen to add one more name to his roster of forward options.

UPDATE: Make that five! West Ham have reportedly opened talks with Mateja Kezman as well. The Serbian striker is currently on loan at Zenit St. Petersburg from Paris Saint-Germain.

UPDATE: Make that six! Egyptian striker Mido is currently at Upton Park discussing a six month loan move from Middlesbrough. I could be totally off the mark here but I reckon West Ham might be on the look out for a centre forward. 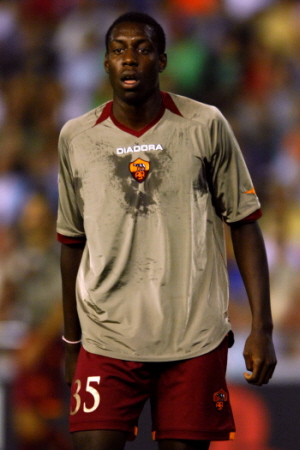 Stefano’s a fantastic dribbler, all down the front of his shirt

Rumour No. 2: AS Roma’s young striker Stefano Okaka has joined Fulham on a six month deal. Okaka signed off in style at the Stadio Olimpico after coming off the bench to score a cheeky winning goal at Siena last night, before flying to London to finalise his loan move to The Cottagers.

The Best of the Rest: Fulham are also looking to secure Aston Villa’s Nicky Shorey on a six month loan deal.

Sunderland have ended their interest in Habib Beye and switched their sights to signing Tottenham right back Alan Hutton on loan.

Wolves have made an absolutely, positively final bid of £5 million for Hull’s Stephen Hunt. Mick McCarthy is also keen to sign James Vaughan on loan from Everton.

Stoke City are trying to hijack Tottenham’s bid for Portsmouth keeper Asmir Begovic. It’s thought that The Potter’s offer of a first team place will sway the Bosnian stopper toward The Britannia.

Stoke may also make a surprise bid for Jermaine Pennant who is currently at Real Zaragoza.

Birmingham City have now targeted FC Basel’s Marco Streller in their desperate search for a striker.

Blackburn Rovers are working hard to sign a replacement for Benni McCarthy and have set thier sights on either Stoke’s James Beattie, Man City’s Benjani or Lens’ Aruna Dindane.

Portsmouth are trying to sign Sunderland’s Nyron Nosworthy on loan but have Bolton’s Danny Shittu lined up as an alternative should The Black Cats spurn their advances.

Newcastle are nearing a deal to sign Leon Best from Coventry City.

Celtic have signed Diomansy Kamara from Fulham until the end of the season.