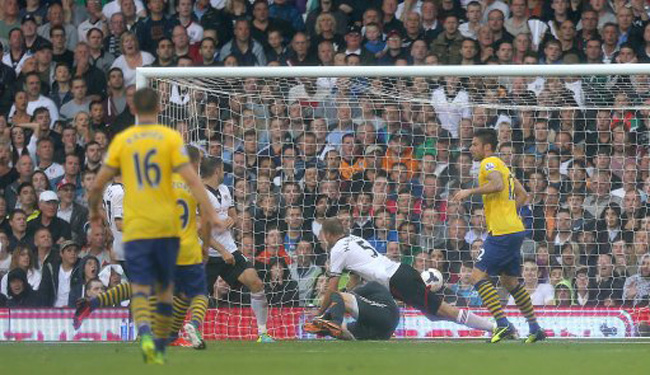 Arsenal built on their excellent midweek win against Fenerbahce with a very comfortable 3-1 victory against Fulham at a very rainy Craven Cottage.

Aaron Ramsey, Santi Cazorla and Tomas Rosicky totally overpowered the Whites’ midfield and it was the in-form Ramsey who created the opening goal on 14 minutes, with Olivier Giroud inadvertently blocking his shot before the Frenchman deftly lifted the ball over ‘keeper David Stockdale.

The goalkeeper was called into action throughout the game, but after palming away Theo Walcott’s effort just before half-time, Lukas Podolski was on hand to crack home a superb side-footed finish to make it 2-0 going into the break.

Fulham did their best to fight back after the break, but Arsenal’s central defensive partnership of Per Mertesacker and Bacary Sagna were rarely tested and on 68 minutes the visitors went even further ahead, courtesy of another Poldi piledriver after great work from Giroud and Cazorla.

Sub Darren Bent did score yet another goal against Arsenal but ultimately it was a well deserved win for the Gunners. A few big signings in the next few weeks and the north Londoners could still have a say in where all the silverware ends up this season.