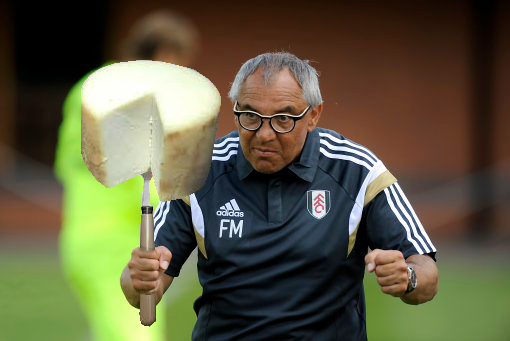 “Smell my cheese, you mutha!”

Taylor writes in the Observer:

“It goes back to last season when Brede Hangeland, then the Fulham captain, was diagnosed with a slight thigh injury and the club’s doctor, Stephen Lewis, with more than a decade of working in elite sport, put together a recovery programme to try to get him fit for the weekend.

“Except Magath thought he knew better. There was another way to treat the problem, he said. So he sent the kit-man to the Tesco in New Malden, a short drive along the A3 from Fulham’s training ground, to buy a large block of cheese.

“Hangeland was then told to perch on the end of a massage table and spend the afternoon in that position with a slab of cheese carefully positioned on the sore spot.

“The cheese, according to Magath, would have soothing effects.”

It should come as no surprise to learn that doctor Lewis and Hangeland had both left the club in the space of the next few months.

The story has since been verified by ex-Fulham captain Danny Murphy, which is good enough for us.

Which means we have but one question: What the heck?