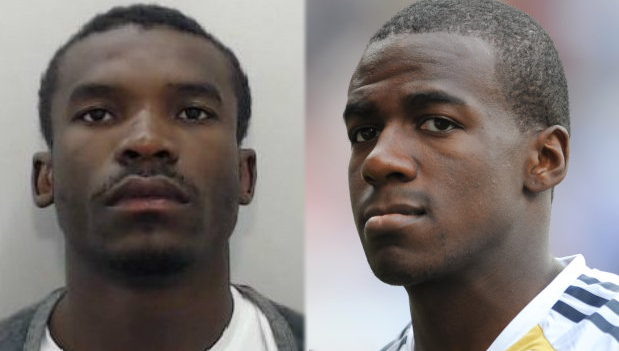 A former footballer who had short stints at Derby, Oldham, Southend, Fulham and Crystal Palace has been jailed on multiple counts of fraud after posing as Chelsea midfielder Gael Kakuta to fund his lavish lifestyle.

Medi Abalimba, 25, once joined Derby for over £1million back in 2009, but after his professional career dwindled he regularly pretended to be Kakuta (who is currently on loan at Rayo Vallecano) in order to facilitate a VIP existence he had no means of supporting.

Indeed, Manchester Crown Court heard he once went on a £20,000 spending spree at Selfridges, regularly stayed in suites at luxury hotels and even hired a helicopter in Kakuta’s name.

This from BBC News Manchester:

“The court was told he would ring a venue advising of the imminent arrival of an elite sport star, requesting discretion and paying for goods with stolen credit card details.

“Abalimba obtained the details by photographing American Express cards he found in lockers he broke into using a master key at a gym in Camden, north London.

“In June 2014, he visited a Manchester nightclub and ordered £2,600 worth of champagne while claiming he left his wallet in his limousine (classic!).

“He pre-paid more than £2,000 using stolen credit card details telling staff he would return next day, which he did, ordering more champagne and leaving in a chauffeur-driven Bentley GT.

“In July, he ordered more than £20,000 worth of clothes in Selfridges in the Trafford Centre, even displaying his football skills while shopping – but store detectives were suspicious.

“His crime spree saw him stay at expensive hotels, dine at fine restaurants and, on one occasion, he even took four women from Manchester to London in a helicopter.

“Greater Manchester Police tracked him down to an £800-a-night rented mansion in Berkshire.”

Yesterday, Abalimba admitted 12 offences of fraud and dishonesty and was sentenced to four years.

Abalimba’s barrister, speaking in mitigation, told the court that his client had a “rough upbringing” and that he “ran with the wrong crowd”, adding that his difficulties had “snowballed” since the money began to dry up.

It’s a tale as old as time.