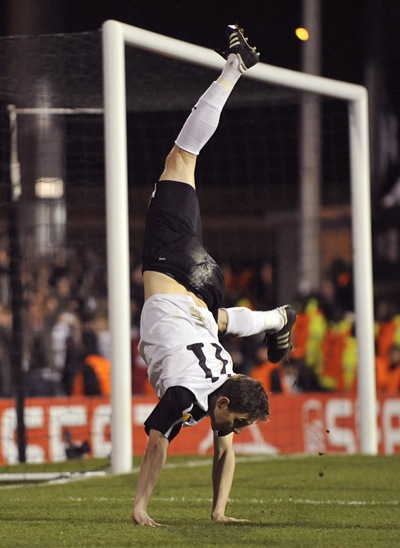 What a cracking match, one for the ages. This result isn’t just the greatest in Fulham’s history, but also one of the greatest in English club football. Imagine Cagliari thumping Man Utd 4-1 and you’re close.

The massive goodwill towards Fulham after this result, which admirable manager Roy Hodgson has so much to answer for, has taken me by surprise. On Twitter last night, there were messages of support from diehard fans of Man Utd, Arsenal, Chelsea (maybe not Chelsea)… hell, everyone enjoyed this win. These days it’s almost impossible to dislike the Cottagers.

Juventus were a tad unlucky to have Fabio Cannavaro – a shadow of his World Cup-winning self – sent off, but no one can deny that Fulham deserved the win. They beat Juve by playing proper football, rather than using desperate long balls, long throw-ins or bully-boy tactics.

Clint Dempsey’s tie-winning goal, which we posted up last night, was the perfect way to end a pulsating match, during which Fulham developed an unstoppable momentum. Juve lost the plot near the end, but then I don’t think they ever imagined a world in which Bobby Zamora could destroy the man who lifted the World Cup for Italy less than four years ago. Funny old game indeed.

Fulham’s reward is a winnable tie against Wolfsburg of Germany. Having beaten the holders and now one of Italy’s great old clubs, they will start as slight favourites against the Germans. But Roy Hodgson will guard against such complacency. He knows Fulham will need to pull out the stops once more if they are to continue on this amazing European journey – Wolfsburg are a very resilient side.

A bumper gallery from the Cottage: