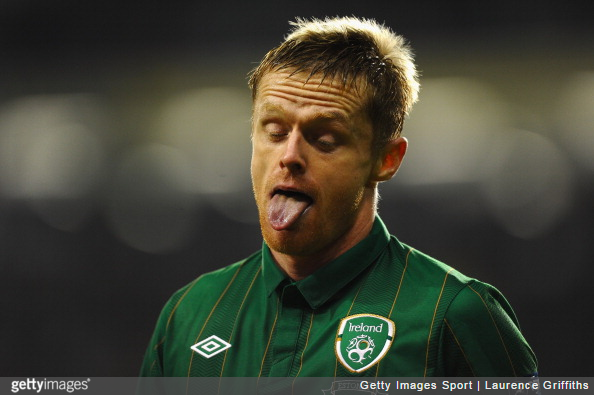 Damien Duff called time on his 20-year career on Monday after finally accepting that, while the head and heart are still willing, his body can no longer keep up.

The former Republic of Ireland international winger had been on the books at Shamrock Rovers, where he was donating all of his wages to charity.

Sadly, a slew of shakeable injuries have forced the 36-year-old into calling it a day.

After much deliberation, I have today decided to bring my professional football career to an end.

My heart wants me to continue playing but my body has finally won the battle and told me to stop.

I’ve lived every young boy’s dream and I know I am a very lucky man.

I would like to thank everyone who has helped me along the journey from schoolboy football in Dublin and moving to England as a teenager right up to today.

I am extremely proud to have won 100 caps for my country – it was always my greatest pleasure to represent Ireland and I have many magical memories from my international career.

While I have finished playing, I am progressing with my coaching badges and will stay involved in the game for many years to come.

I am grateful to Pat Fenlon & Shamrock Rovers F.C. for giving me the opportunity to finish my career back home – they have some exciting plans for the club for the future & I wish them well. I had hoped to play for one more year but it was not to be.

Thank you to all the many fans for your support over the years.

I would like to especially thank my wife Elaine, my children, my parents Gerard & Mary and my family for being, and continuing to be, my biggest supporters.

Given that he’s been out of the limelight for a while, it’s perhaps easy to forget just how good was, especially at Chelsea and Fulham. An old-fashioned winger with a trick, a burst of pace and an end product 90% of the time. Relatively simple stuff, but bloody effective.

Well played Damien. All the best.