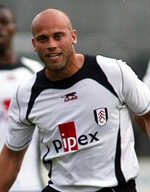 If only all footballers were as principled as Claus Jensen, who refused a one-year contract extension at Fulham because he didn’t like the long-ball philosophy of new boss Lawrie Sanchez.
Jensen said: ‘I didn’t see a future for me at the club, the way Lawrie Sanchez wants to play doesn’t appealâ€¦ The long-ball game has been pretty much what we’ve been doing and that isn’t my kind of football.’ A friend of mine who supports Fulham emailed me when Sanchez was appointed voicing exactly the same concern – Sanchez’s teams are very direct, although it’s too early to say that Fulham will therefore play dull football next season.
Jensen, a classy footballer who has never quite fulfilled his potential in England, is now a free agent and I’m sure he’ll find a new club â€“ at Championship level perhaps – quote easily. [Via BBC]