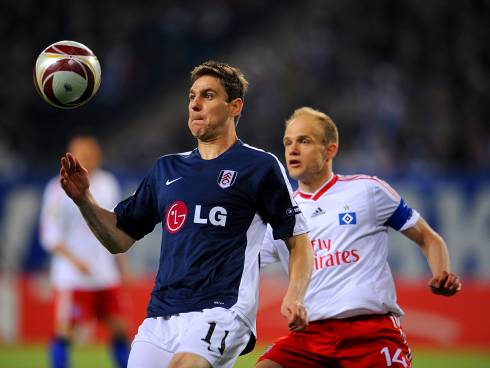 Hamburger SV coach Bruno Labbadia faces a decision over his future just day before they meet Fulham for the second leg of the Europa League semi-final clash on Thursday evening.

Hamburg went down 5-1 to mid-table Hoffenheim in the Bundesliga at the weekend and now Labbadia is facing mounting pressure from supporters and the boardroom alike.

“We are going to speak together with the coach and ensure we do what is right for [the Fulham game], that is our last chance to leave a route into Europe next season open.

There is not really much more that I can add to that.”

Sounds pretty ominous to me.

Both Schteeve McClaren and former-Liverpool manager Gerard Houllier are being touted as potential replacements for the increasingly beleaguered Labbadia.

UPDATE: Reports in the German media are suggesting that Hamburg have parted company with Labbadia this morning – although the club themselves are yet to confirm the news.

UPDATE No. 2: It has now been confirmed that Bruno Labbadia has been sacked by Hamburg. The club have also confirmed that their reserve team coach Ricardo Moniz will be in charge for the trip to Fulham.