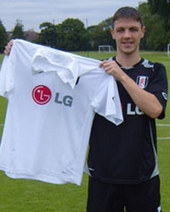 It’s sort of a rhetorical question, because to my mind he is definitely the worst player in the top flight. I’ve seen him in the flesh a couple of times this season and he’s been truly shite, of a standard you’d expect of players in League One or worse. Quite why Lawrie Sanchez bought him, and for a silly Â£3m, is a mystery to me – well, not a total mystery given that Baird has played for Sanchez for Northern Ireland.
Baird has almost nothing going for him, bar fitness. He can’t pass, can’t tackle properly and his positional awareness is dreadful. He’s also a shortarse. Oh, and he’s uglier than Gary Neville.