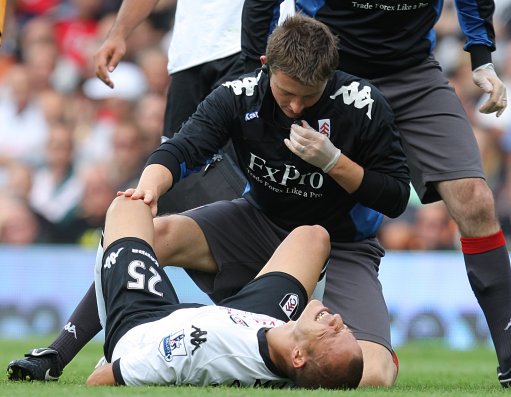 Fulham have confirmed that Bobby Zamora‘s operation to reset the broken fibula he sustained against Wolves on Saturday has been a success, but the club have also revealed that ligament damage was discovered during the procedure – meaning the striker probably now faces nearer five months on the sidelines, rather than the four that were initially diagnosed.

“[Yesterday] morning, Bobby Zamora underwent an operation on the injury sustained in Saturday’s match against Wolverhampton Wanderers. The operation was viewed as successful by the surgeon and the fracture to the fibula was repaired, ligament damage was also discovered and repaired during the operation.”

Cottagers manager Mark Hughes has now turned to summer signing Moussa Dembele, who scored both goals in the 2-1 win over Wolves, to fill the void left by Zamora;

“We hope Moussa can get the goals. There’s a big onus (stop sniggering at the back) on him now that Bobby’s gone. But it’s a big ask, you can’t just hang a hat on Moussa. He’ll get good support from the guys around him and that will help him become the success we think he will be.

The beauty of Moussa is that he can play in a number of positions. That’s the attraction from my point of view because I like players who have that flexibility. Moussa is always very positive, everything he does has a positive slant on it. That’s the key to the way he plays.”