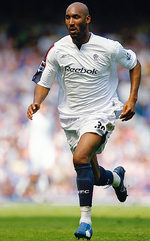 The January transfer window is open for business, and so football’s rumour mill has gone into overdrive. Will Berbatov stay at Spurs? Has Joey Barton taken a shower yet? So many questions, so few answers. Here are the top 5 transfer window rumours of the day, neatly summarised in one cut-out-and-keep package:
1 Avram Grant wants to splash out Â£35m to sign both Nicolas Anelka (pictured) and ‘want-away’ Dimitar Berbatov. Via Daily Star
2 Sunderland boss Roy Keane likes the look of Reading’s Stephen Hunt but Steve Coppell is not impressed. Via Mirror The tabloids have also reported that Keane is interested in Blackburn’s Robbie Savage and Chelsea’s Steve Sidwell, both combative midfielders in the Keano mould.
More rumours after the jumpâ€¦

3 New Fulham manager Roy Hodgson wants to make Harry Kewell one of his first signings. In the words of the Mirror, ‘The Aussie midfielder’s contract runs out in the summer and Hodgson believes he can tie up a Â£1.5million deal for the flying winger this month’. Not sure an injury prone midfielder should be at the top of the Cottagers’ shopping list.
4 According to The Daily Telegraph, ‘Struggling Derby County are close to making their first signing of the transfer window. Manager Paul Jewell confirmed yesterday that he had “almost completed” a deal to sign Emanuel Villa, the Argentine striker, who is set to fly in later this week to conclude talks and undergo a medical.’
5 Sven-Goran Eriksson is lining up a ‘Â£2m swoop’ for Crystal Palace’s highly rated 17-year-old winger Sean Scannell. Scannell ‘burst on to the scene last month as a sub with the winner in the 2-1 victory over Sheffield Wednesday’. Via Tribal Football