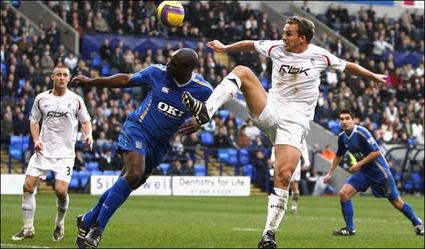 The list is based on fouls committed, which I concede is a flawed way of deciding which players are dirty. For example, there are no defenders on the list, because a) defenders are expected to make tackles, so referees are more lenient on them, and b) midfielders and forwards are simply not as good at tackling as defenders. Still, it’s interesting to see which players have committed the most fouls in 08/09.
In reverse order…

6. Carlton Cole
The improving West Ham striker, who likes to put himself about, has so far committed 64 fouls in 26 games, or almost three fouls per game.

5. Tim Cahill
Cahill’s goal celebration involves him shadow-boxing the corner flag, which is a decent clue to his pugnacious character. The Aussie has committed 65 fouls so far in 08/09, and currently stands 10th on the all-time Premiership/Premier League fouls table, with an impressive 337 fouls in his Everton career.
4. Wilson Palacios
Palacios has added much-needed bite to Spurs’ midfield, as shown by his 70 fouls (the stat also factors in his previous spell this season at Wigan Athletic).
3. Bobby Zamora
When you have as bad a first touch as Bobby Zamora, you’re going to spend a lot of time getting stuck in to win the ball back. The result: 75 fouls this season by the Fulham forward.
2. Marouane Fellaini
I spoke to Pat Nevin for ShortList magazine last week and he was raving about Fellaini, in particular his physical strength -Â Nevin was impressed that such a young player had the cojones to bully even the likes of Nemanja Vidic and Rio Ferdinand. Fellaini is one of two players to have passed the 100 fouls mark this season; he’s currently on 101. 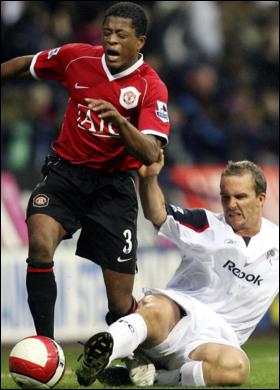 1. Kevin Davies
Davies has committed more fouls in Prem history than any other player (624 at time of posting!), so it’s no great surprise that he’s No.1 again (108 fouls with one game to go). Davies, who has had a fine season, is like a poor man’s Alan Shearer – he uses his physical strength to bully defenders.