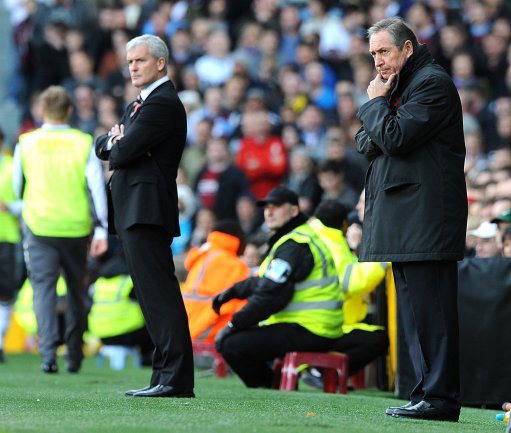 Shortly before close of play last night, Aston Villa released a statement to confirm that Gerard Houllier had indeed left the club on health grounds after only nine months in charge at Villa Park.

Houllier was forced to miss the last five games of the Premier League season after his dicky ticker played up again in April, with assistant manager Gary McAllister overseeing Villa’s late run to 9th spot.

Villa exec Paul Faulkner publicly stated last night that the club have already
’embarked upon the process which will lead to the appointment of a new manager’, with Fulham boss Mark Hughes (whose rolling contract with the Cottagers apparently expired at midnight last night) by far and away the favourite to replace Houllier – though it was Everton manager David Moyes that topped the Birmingham Mail’s supporters poll with a 44% majority.

Any thoughts? Reckon Sparky’s about to do the dirty on Fulham and up-sticks for Villa? And, with Ashley Young and Stewart Downing both teetering on a summer exit, just how attractive a proposition are Villa at the moment?