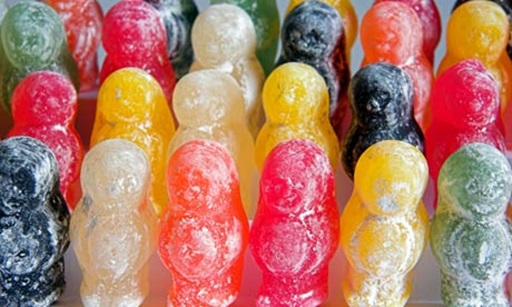 Lincoln City manager Gary Simpson has been forced to admit that he can only claim a reduced role in inspiring his side’s 2-1 Conference victory over then-league leaders Barnet on Saturday and that most of the plaudits should in fact be directed toward the packet of jelly babies used to mastermind the whole thing!

You see, after Lincoln’s team bus mysteriously failed to turn up on the morning of the game, the Imps’ players and staff were forced to make their own way to Barnet’s ground – meaning that several larger pieces of matchday equipment had to be left behind.

Unfortunately, Simpson’s trusty magnetic tactics board wouldn’t fit in the boot of his car, leaving the Lincoln boss in need of some other way to demonstrate his pre-game directions in the away dressing room.

Thankfully, proving himself the Ray Mears of the lower leagues, Simpson was able to improvise with a kit bin lid and a packet of the aforementioned gummy sweets…

Given the result, Simpson has refused to rule out using Jelly Babies for his next team talk, telling BBC Radio Lincolnshire: “If we can keep winning I will do whatever is necessary!”

Indeed, the Jelly Baby method has proved so successful that Lincoln City are even adopting the practice for their U10s academy side…