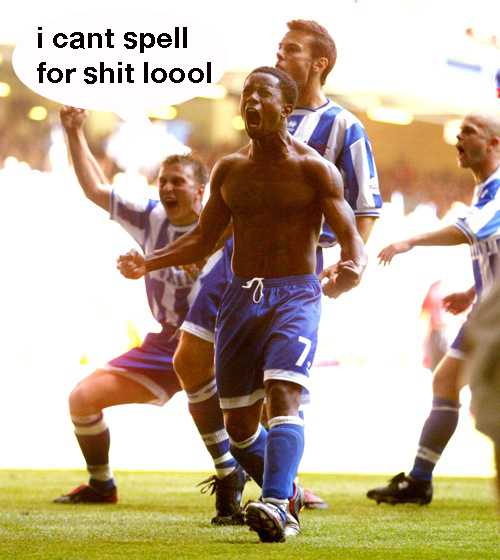 If you’re on Twitter (as I am), then you must follow journeyman footballer Leon Knight. Knightie, as he prefers to be known, is GOLD.

Some examples of his tweets:

For those who don’t know colin hill he’s the funder of rusden and diamonds he’s the biggest crook EVER!!!!!!!

i cant spell for shit loool excuse my french !! i shud of listened in school tut tut i have no gcse’s nothing

Leon Knight is 28, though you wouldn’t know it from his shaky grasp of the English language, nor his knockabout Semitic stereotypes. As he admits, he’s been around the block – you should check out his career path on Wiki – and along the way earned a rep as a player with plenty of raw talent but an equally abrasive attitude; those who defend him claim he’s misunderstood, equally I know some fans who have no time for him at all. Smoke meet fire.

He’s currently without a home, and he’s in dispute with former club Rushden & Diamonds; he claims the club have invoked a clause in a contract signed in 2008 to retain his registration until the end of 2010-11. This has put a spanner in Knight’s proposed move to Darlington, a cause of obvious frustration for the player, as his recent tweets have shown.

Anyway, we recommend you follow @knightie82 and you’ll certainly be first to hear when he finds a new club.