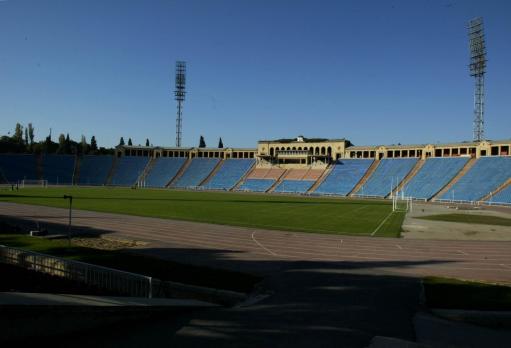 Azerbaijan’s National stadium, home to their national side and FK Baku

You hear stories all the time of cheeky urchins submitting their Football Manager CVs to clubs in the hope of somehow getting themselves an interview. Indeed, when a 25-year-old lad by the name of John Boileau first tried his luck by contacting Middlesborough owner Steve Gibson about their managerial vacancy in 2006, Gibson even sent back a light-hearted ‘sorry, you didn’t get the job this time‘ letter.

Many have tried since (a 17-year-old Korean kid sent Bath City over 100 emails trying to get an interview for their vacant manager job just last year) though none have succeeded – until now… sort of.

Having initially been hired by Azerbaijani Premier League side FK Baku in February in an advisory role, 21-year-old Azerbaijan-born, Sweden-based student Vugar Huseynzade is now the manager of the club’s ‘A’ side, i.e, their ‘reserves’ by any other name – having landed the job on the basis of the strength of his Football Manager resumé.

Huseynzade has no actual managerial experience and is fresh out of Business School, with a month or two’s work experience at an American sports agency his only (tenuous) link to the sporting world. FK Baku initially hired the Baku-born student based solely on being impressed by the knowledge of the game young Vugar applied in setting up and running his Football Manager team.

Eight months down the line and FK Baku have decided that Huseynzade is the man to whip their ‘A’ side into shape having been without a manager for two whole years since previous incumbent Kamran Ismayilov upped and left.

The craziest part? Huseynzade was reportedly prefered to former Marseille and France legend Jean-Pierre Papin – who does have a little bit of managerial experience under his belt as it happens.

Madness gone mad. Still, at least there’s now renewed hope for us all. Bath City can probably expect another 100 emails in their inbox by this time tomorrow!