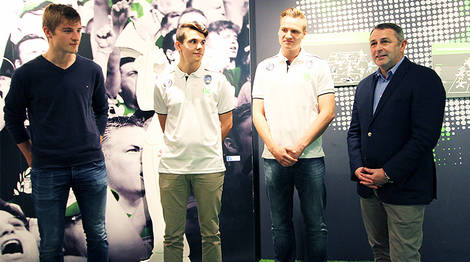 The dynamic duo with thumbs of steel

VfL Wolfsburg have become the first Bundesliga side to launch their very own in-house computer game “e-sports” team.

That is to say, the German club have signed up two expert professional gamers, Benedict ‘Salz0r’ Salzer and Daniel ‘Dani’ Fink, to officially represent the club at competitive gaming tournaments.

Having qualified last month, the newly-formed Wolfsburg E-Sports team’s first task will be to take part in an upcoming ‘virtual Bundesliga’ FIFA 15 tournament that is being organised by EA Sports.

“The games get more realistic from year to year and are well received by both our professionals and our fans.

“With our commitment (launching the e-sports team), we want to bring together the two worlds in the future even more closely.”

Seeing as the last football game we played was probably PES 6 (it had the long-defunct Adriano on the box if memory serves) we’re probably not best placed to comment, but bloody hell fire what’s happening to the world?