In the midst of the cascade of breaking FIFA corruption scandal news we’ve been bombarded with over the past 24 hours, Pies stumbled across a brilliantly pithy Codehesive article from 2011 that resonates just as loudly in these troubling times as it did three-and-a-half years ago.

With kind permission from the author James Offer (@joffley), we have been allowed to recreate the original post here on Pies in full. One thousand thank-yous and a big tub of vanilla fudge are definitely due.

As a quick preamble, in the wake of yet another year-long wave of FIFA scandals, James penned a faux review of the then-new FIFA 12 computer game, imagining that EA Sports had decided against churning out yet another football arcade game and instead produced a sim focused on FIFA’s dodgy inner machinations – with unprecedented levels of realism!

Consider it a bit of a bonus Throwback Thursday guest post treat.

Anyway, we won’t spoil the fun for you by gabbing on any further, but it’s safe to say James’ mocked-up in-game graphics are true works of art!

Everyone’s talking about the new FIFA 12… but what if FIFA 12 was actually just about FIFA? 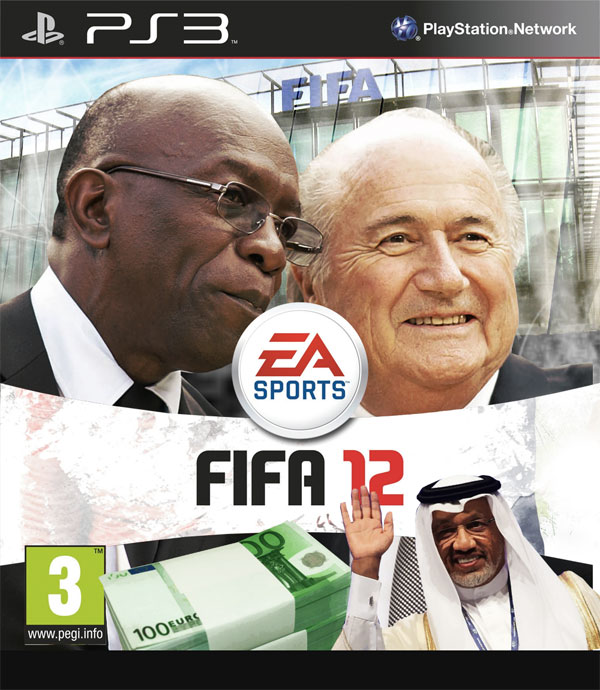 Jack Warner, Sepp Blatter and Mohamed bin Hammam feature on the cover, but will they be friends by the end of the game?

I’ve only been playing FIFA 12 for a few hours, but it’s already really obvious the new format is a bold move: ditching all footballing gameplay in order to make the game a simulation about what actually happens at FIFA headquarters.

Over the past year there’s been a presidential election and the awarding of two World Cups, so there’s been plenty going on to help shape the game’s new direction.

Let’s look at the new game modes one by one… 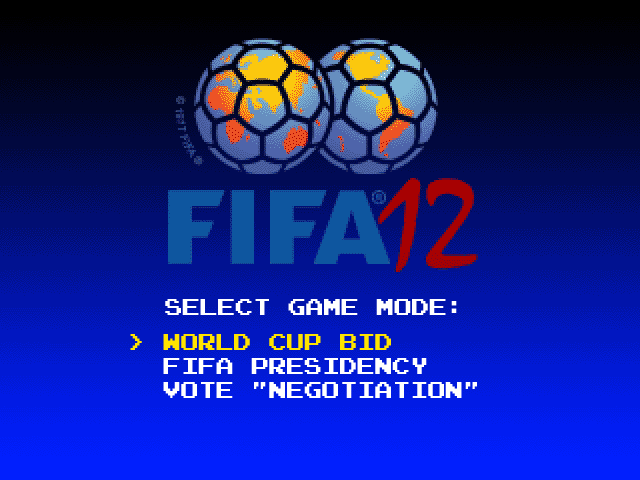 The graphics may have suffered slightly, but the diverse range of gameplay certainly makes up for it!

Every football fan’s dream is to have the FIFA World Cup happen in their own home country. 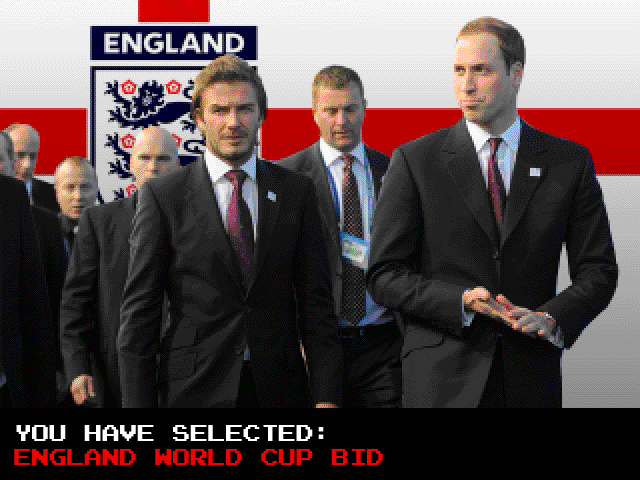 Lobbying to get your country the World Cup sees you jet-setting around the world meeting with different representatives from world football, trying to convince them your country will put on the best World Cup possible.

But is it as simple as that? 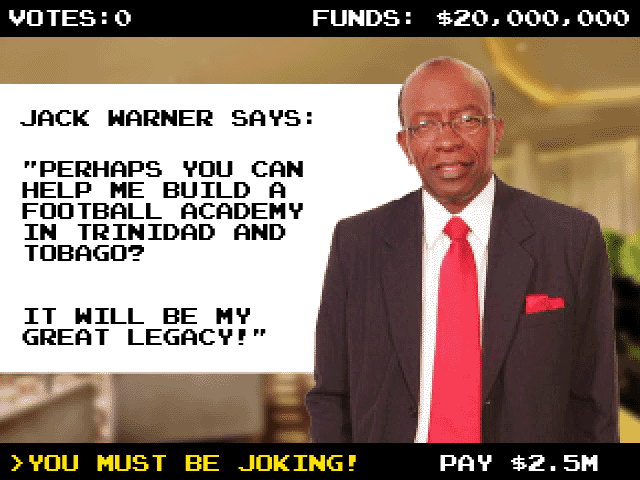 Oh dear, it seems Jack Warner wants a bit more for his vote. 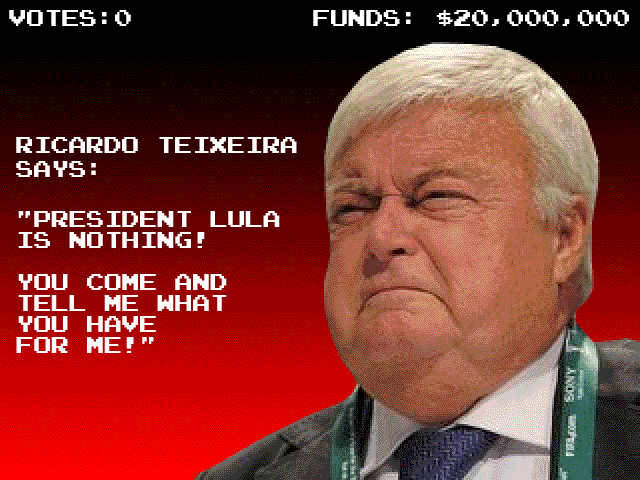 You’re not going to win the Brazilian vote that easily! Ricardo Teixeira is quite the tough cookie. 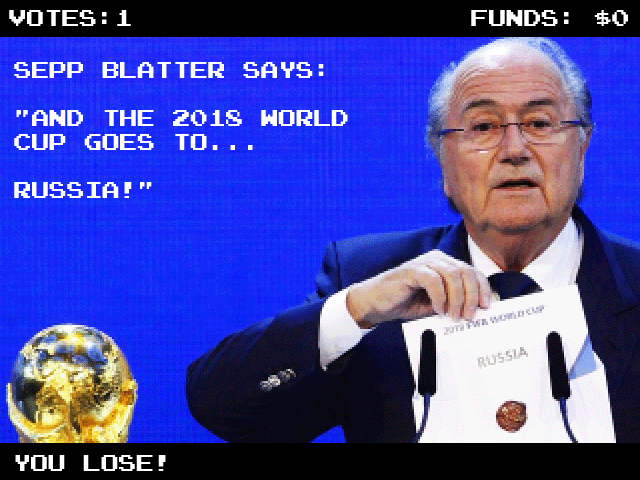 Russia wins! But you were promised more votes than that! Perhaps you didn’t hand enough gift hampers out…

I think every football fan has dreamt about being FIFA President. What crazy initiatives could you bring in? Goal line technology? The world would be your oyster! 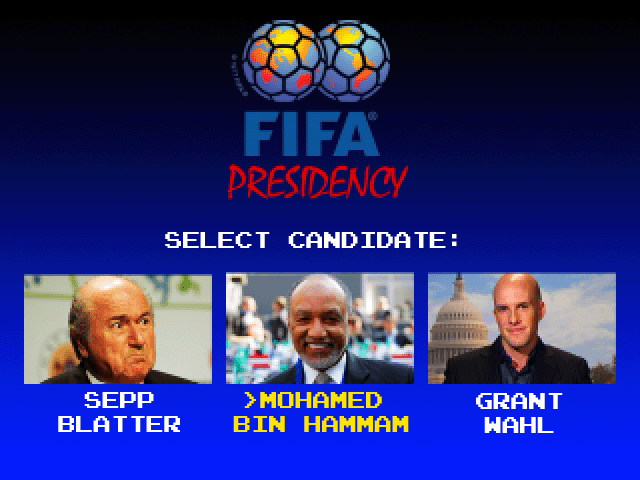 Who will you run as? Grant Wahl is the underdog, Sepp Blatter the incumbent… maybe Mohamed bin Hammam will have a good chance? 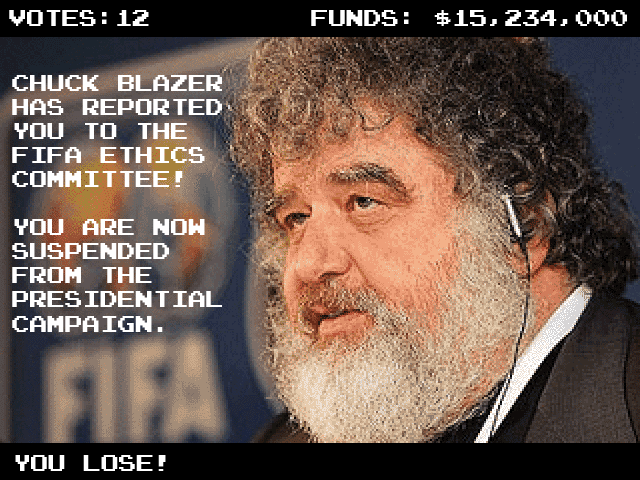 You’ve got to watch your back — Chuck Blazer has reported you to the FIFA Ethics committee! 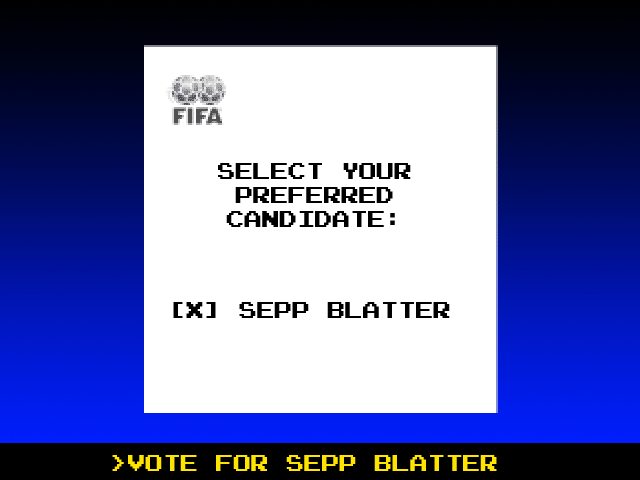 Hmmm, who will you vote for?

While the campaign for presidency is quite fun, the major let down is the actual voting: I’ve played the game a few times and it always ends up only being Sepp Blatter up for election! 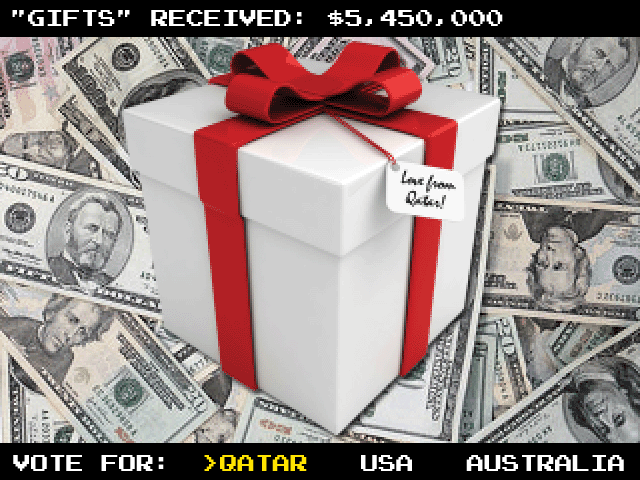 This game mode isn’t as long as the others, and is a bit disappointing: it seems you just try and fleece as much money out of potential World Cup bidders as possible.

Perhaps a Sims-like interface where you can build your own mansion (with an onyx-lined meditation room, of course – ed) with all your money would make it a bit more interesting?

While the real FIFA 12 is no doubt a great game, it concerns me that so many people are playing a game that bears the same name as an organisation shrouded in controversy and murky politics that is desperately in need of reform.

Sepp Blatter has promised us that reform, but as someone elected as a sole candidate, how much can we really expect?

I really hope that by the time FIFA 13 is released, FIFA has cleaned up its act. But think about the inevitable future game franchises for Russia 2018 and Qatar 2022: they will be sad reminders of the current FIFA’s legacy — not to mention the actual tournaments themselves.

Just a reminder that this cracking article first appeared on Codehesive in Oct, 2011 (interesting how little has changed since then).