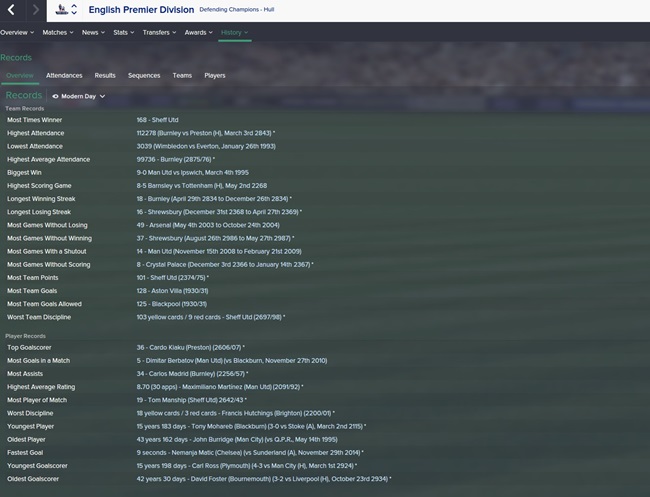 Quite why is anybody’s guess but one dedicated Football Manager 2015 fan has spent the last 58 days of his life simulating the next 1,000 years of English football – and the results are fairly surprising.

Having posted the incredibly detailed results of his enormous sim on Reddit, gamer Lorf_Yimzo has revealed that the twin footballing behemoths to emerge over the course of the next millennium are Sheffield United and Burnley – who dually dominate on both the domestic and European front.

The Blades emerged with 167 Premier League titles to the Clarets’ 138, though the latter narrowly came out on top in the Champions League with 42 victorious final appearances as opposed to Sheffield’s 41.

Chelsea, reigning Premier League champions going into the simulation, managed just one more paltry league title in the next 1,000 years – as many as Forest Green Rovers, Alfreton Town, Wycombe Wanderers and Halifax Town.

However, the real overall losers are Andorran minnows CE Principat, who embarked upon a 257-game losing streak in the Europa League that stretched over some 550 years. That’s got to have an effect on morale.

Lorf_Yimzo also posted screenshots of his transfer fee and stadium capacity records, with Coventry City taking the former by paying  £81million for Bordeaux’s Jeremy Lannoy in the year 2044, while Burnley boasted the largest home ground having outgrown Turf Moor and moving into the 112,278-capacity Harry Potts Arena.

Think we might nip down to the bookies and stick a fiver on Sheffield United and Burnley if it’s all the same with you.

You can have a rummage through all of the various results here.