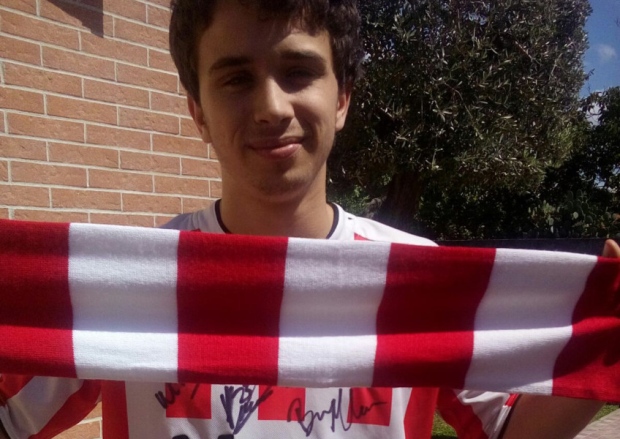 The nutter you see before you is 19-year-old Alessandro Colombini, a card-carrying Football Manager obsessive from Livorno in Italy.

In fact, so obsessed with Football Manager is Alessandro, that he decided one day that he just couldn’t go on living his life without shaking hands with the star of the Derry City team he’d guided to glory over the course of three years, striker Patrick McEleney.

And so, with nowt but a print-out of McEleney’s Football Manager stat screen in tow, young Alessandro set out on a mammoth 5,000km round trip to meet his man.

Our hero made it to Derry in time to take in City’s game against Limerick at Brandywell Stadium last month then stationed himself outside the changing rooms after the game, waiting patiently to grab a few words with McEleney as and when he emerged.

Alessandro recounted the magical moment to the Derry Journal:

Paddy [McEleney] looked at me like I was an alien – he must have thought I was mad.

I wanted to meet Patrick after the game because I wanted to tell him how good of a player he is for me in ‘Football Manager’.

I told him I was from Italy and that he was brilliant in the game.

I don’t think he knew how to react but he gave me his autograph and we had a good laugh about it.

He also managed to bag himself a souvenir…

from livorno (italy) to derry (northern ireland) for an autograph. he said that i’m crazy #wearethemanagers pic.twitter.com/rRhmAl3e1B

Alessandro apparently fell in love with all things Derry after reading a book about Bloody Sunday as a 16-year-old.

He then took over the Candystripes on Football Manager and proceeded to take them into Europe over an intense three-year period.

However, his Derry adventure is now over after a call from Roma turned his head.

I’ve been managing Derry City in ‘Football Manager’ for the last two or three years.

I had my best season last year when I took Derry to the Champions League but AS Roma offered me the chance to come and manage them and as football fans know, when Roma ask, you must answer.

Oh well, at least he won’t have quite so far to go for an autograph this time round.