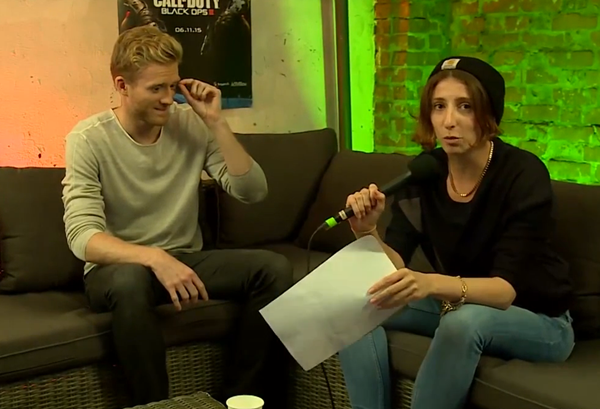 Apologies as our translation may be a little off here, but what we think we’re looking at is a German interviewer mistakenly lulled into thinking she was chatting with a professional Call of Duty gamer (yep, apparently such a thing exists).

In fact, she was actually grilling Wolfsburg winger and World Cup winner Andre Schurrle, who is paid to shill for Call of Duty over in Germany and had turned up to wax lyrical about his favourite game.

To be fair to Schurrle, he didn’t get offended – in fact, he simply adopted the persona of “Christian Chmiel, 2008 ESL pro-series champion” for several minutes instead…

Host: “I’m excited to do this spontaneous interview. Since it was so spontaneous, I was only given a Wikipedia article and I may now say hello to Christian Chmiel, who was 2008 ESL pro-series champion and is now back – hello, Christian.”

Host: “I’m surprised you can speak German because in my article it says you’re from England and I wanted to talk English to you but you said “wie gehts?” (German for ‘how are you’)”

Schürrle: “Yeah, my mother is German and my dad is from England, but that may not be part of your Wikipedia article.”

Host: “Nice, so you were raised bilingually?”

Host: “I have a few questions for you. Do you think that Denial won deservedly against Revenge in this year’s championships?”

Host: “Okay! Why are you laughing?”

Schürrle: “It’s just… I played a few times against him and yeah…”

Schürrle: “Yeah, he had no chance, one has to say.”

Host: “Okay, but at the tournament… do you think that Denial won deservedly against Revenge?”

Schürrle: “Yeah, definitely, I think it was a good ga-hahahaha”

Host: “Why is everybody laughing? Are you dumb? I mean, not you… (to Andre)”

Schürrle: “I guess I have to clear up something here…”

Schürrle: “You don’t know anything about football at all?”