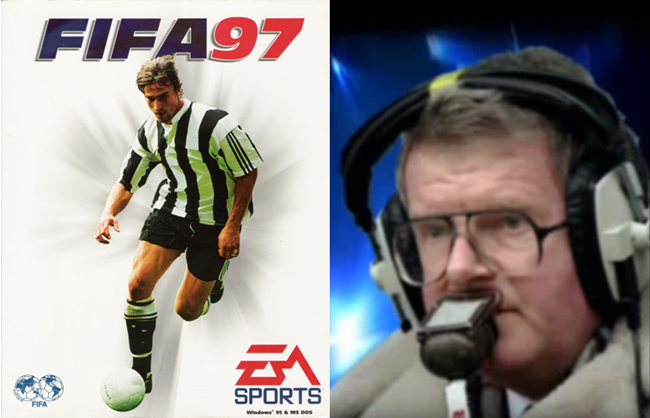 John Motson has been commentating on football matches since 1971, and in all those hours, he’s inevitably said some daft stuff.

However, buried in his gigantic CV is an almost-rap that he did for one of EA’s FIFA franchise games.

If you popped your FIFA ’97 disc into your stereo, there was an audio track which was only spoken about in the back pages of gaming magazines in the cheats section.

It’s more of an Easter egg than a cheat, and while it might not enhance your gaming experience, it will certainly enhance your life…

The track is a rock-techno pumper, and features snippets of Motty’s vocals.

Some sound like football commentary, while others, are clearly recorded for the track itself… unless you can recall a time during a match where Motson said “that is the fattest bottom end I’ve ever heard”, “we’ve got some funky stuff in the house”, “what a ripping little solo”, and the line which should be iconic: “This reminds me of touring with the Sex Pistols”

There’s a lot of orgasmic ‘ooooooh!’ yelps from the legendary commentator too, for good measure – and yes, the guitar solo in the track is an absolute rip-snorter.

This harks back to a time when football games had these little idiosyncrasies, as opposed to being a vehicle to try and get you to part with your money for FUT micro-payments and the like.

If you want to hear the rest of the FIFA ’97 soundtrack in all its grungy, swampy glory, here it is…

Mof Gimmers is a friend of Pies, therefore proving he has immaculate taste. Follow him on Twitter @mofgimmers.