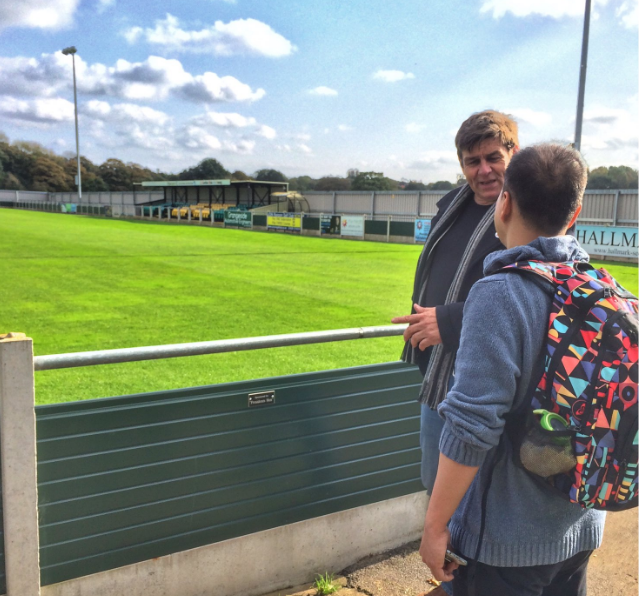 One intrepid Chinese fan embarked upon a 12,000-mile odyssey to visit the very crucible of his footballing obsession: The Millbank Linnets Stadium in Runcorn, an industrial port town on the Cheshire coast.

In reality, Runcorn are currently plugging away in the North West Counties League Premier Division, the ninth tier of the English pyramid. They do, however, boast a rather tremendous corn-shaped club mascot.

Still, Wenbin gathered his family: his wife and their two young children, and whisked them from Xiamen, some 6,000 miles across the world on a special pilgrimage to sunny Runcorn.

Speaking to the Daily Mirror, Wenbin described his herculean voyage.

The first time I made the decision to find Runcorn FC was in 2015.

I went to Liverpool by train to watch Steven Gerrard’s last match at Anfield.

When the train was parking, I saw a sign for Runcorn. I promised my friend I will be there again to find my club.

Alas, the return trip to the North West didn’t go entirely smoothly, with Wenbin and his family taking several wrong turns on the way.

We all breathed a sigh of relief when we saw that someone was waiting for us in front of the stadium. We spent over 24 hours to arrive in Liverpool from Xiamen in China.

We missed the bus station and got lost on the road in the countryside near Runcorn Linnets.

We spent three hours trying to find the club. It must be my false for my poor English speaking and listening.

Still, he got there eventually and, after being given the VIP tour by Linnets club chairman Mark Buckley, Wenbin managed to get some cracking photos to remember his trip by…

best wish : Runcorn Linnets always at the top of the table. pic.twitter.com/xUiK1r9xmn

Buckley himself was also suitably impressed by the dedication on show, personally thanking Wenbin and his family for being such gracious guests:

It was quite humbling, because he was such an honest and polite man. I really, really enjoyed it personally. It was a fabulous few hours.

He has already emailed me umpteen photos and his thoughts from the day, so I think I’ve found myself a pen pal for life, which is brilliant and I’m looking forward to keeping in touch.