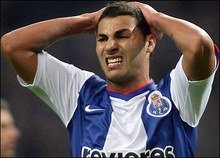 4 True or false: Clarence Seedorf has won the Champions League with every club he has played for?
5 In which Rodgers & Hammerstein musical does the song ‘You’ll Never Walk Alone’ feature?
6 The club crest challenge:

Answers
1 Didier Deschamps
2 Che Guevara (right arm) and Fidel Castro (left leg)
3 Ricardo Quaresma of Porto
4 False. He didn’t win it with Sampdoria or Inter – although he has won it with each of his other clubs: Ajax, Real Madrid and AC Milan
5 Carousel
6 Shakhtar Donetsk
How did you get on this week – too fiendish or not fiendish enough?