1 From which club did Arsenal sign right-back Bakary Sagna?
2 During his time at Arsenal, Ashley Cole was loaned out to which other London club?
3 Picture round. Who’s in close-up? 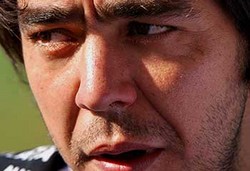 4 Before he became directly involved in football, Peter Kenyon was the chief executive of which sportswear firm?
5 LA Galaxy share their home stadium, the Home Depot Center, with which other MLS team?
6 The club crest challenge:

Answers after the leap into hyperspaceâ€¦