The FFQ usually consists of just six fiendish questions. However, I’m now expanding it to ten fiendish questions. Translation: It’s bigger and more fiendish than ever. Enjoyâ€¦
1 Banfield, River Plate, Feyenoord, Bologna, Inter (current). Whose career?
2 Which Premier League striker’s first name translates as ‘The king loves me’?
3 What relation is ‘Sir’ Les Ferdinand to Anton and Rio Ferdinand?
4 Complete this sequence: Shearer, Platt, Pearce, Gascoigne, Sheringham, _______?
5 Picture round. Name the two violinists (half a point for each). 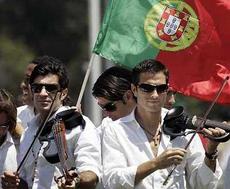 6 Who is the only English player to have won the Champions League twice?
7 With which club did Gary Lineker finish his career?
8 Who are the current MLS champions?
9 Which Premier League player’s nickname in school was ‘Tim-Dawg’?
10 The club crest challenge:

Answers in the usual placeâ€¦

Answers:
1 Julio Cruz
2 Obafemi Martins
3 Cousin
4 Gareth Southgate. It’s England’s penalty shootout sequence in their semi-final defeat to Germany in Euro ’96. Southgate was the first England player not to score. The Germans, as usual, scored all six of their pens and went on to win the championship.
5 Luis Figo and Pauleta
6 Steve McManaman, both times with Real Madrid
7 Grampus Eight in Japan
8 Houston Dynamo
9 Tim Howard, Everton’s goalie
10 Linfield, current champions of the Irish Premier League
Some tough ones in there, so I’d be stunned if anyone got a perfect ten – but let me know how you did with the new, expanded Fiendish Quizâ€¦