1 Crystal Palace, Birmingham City, Crystal Palace (current). Whose career?
2 Who played for England at least once every year for 15 consecutive years, a record for any England player?
3 Who were the first English team to win a European trophy since the Heysel disaster in 1985?
4 What do Lucas Neill, Sam Allardyce, Neil Ruddock, Tim Cahill and Kasey Keller have in common?
5 Picture round: who’s got kisses for you? 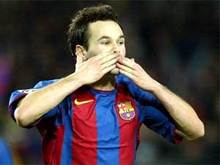 6 Whose club motto is ‘Audere est Facere’ (‘To Dare is To Do’)?
7 How many non-Scottish managers has Scotland’s national team had?
8 Hampden Park is home to the Scotland national team and which Scottish club?
9 Celtic and Rangers have never been relegated – true or false?
10 The club crest challenge: