Welcome to the first FFQ of 2008. New format for the quiz, cause we like to keep things fresh at Pies. Can you answer these teasers? Answers after the jump.
Career path Coventry City, Vasco da Gama, LA Galaxy (current)?
True or false? Gazza’s pop single ‘Fog on the Tyne’ reached No.1 in the charts.
Picture round Who’s the ladies’ man below? (click to enlarge) 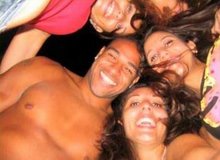 Team-mates Martin Jol, Craig Bellamy, Dennis Wise and Steve Staunton all played for which club?
The fixture Which teams are in action below (click to enlarge)?

The Answers
Career path Cobi Jones.
True or false? False. It reached No.2.
Picture round Adriano.
Team-mates Coventry City
The fixture Gillingham (blue) vs Northampton Town (maroon)
Who am I? ‘Sir’ Les Ferdinand
So, how did you get on with that lot, you lovely people?