1. Career path Perugia, Glasgow Rangers, Salernitana, AC Milan (current)?
2. True or false? Ryan Giggs has been mentioned in an episode of The Simpsons.
3. Picture round Who’s the boy wonder? (click to enlarge) 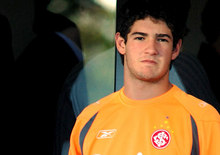 4. Team-mates Ray Houghton, Iain Dowie, Tomas Brolin and Mikael Forssell all played for which club?
5. The fixture Which teams are in action below (click to enlarge)? 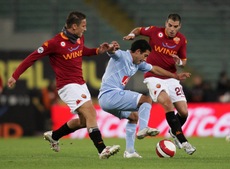 6. Who am I? I was born in Hammersmith, London in 1962. My first league club was Coventry City. I love punk music. I once appeared in a Pizza hut TV ad.

1. Career path Gennaro Gattuso
2. True or false? True â€“ In response to Marge complaining that Homer punched out three people on the street, Homer replies, ‘That was over soccer results. Can you believe they gave Giggs a yellow card in the box?’ (Episode: The Regina Monologues)
3. Picture round Alexandre Pato, AC Milan’s Brazilian star-in-the-making
4. Team-mates Crystal Palace
5. The fixture Roma (dark red) vs Napoli (sky blue)
6. Who am I? Stuart Pearce
Any maximums out there, people?