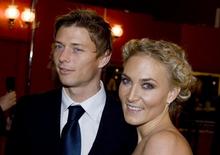 4. Team-mates Karel Poborsky, Stefan Schwarz, Claudio Caniggia, Pierre Van Hooijdonk and Rui Costa have all played for which club?
5. The fixture Which two teams are in action? (click to enlarge)

6. Who am I? I was born in Mozambique, in 1972. I have played for both Everton and Liverpool. I have also played in Portugal, Italy, Spain, Holland, Turkey, Germany, and the USA.

1. Career path Benni McCarthy
2. True or false? True – Becks played five games for Preston, where he was sent on loan by Man Utd, in 1995
3. Picture round Jon Dahl Tomasson
4. Team-mates Benfica
5. The fixture Bayern Munich (red) vs Boca Juniors (blue)
6. Who am I? Abel Xavier
Too fiendish, or not fiendish enough? Scores on the doors pleaseâ€¦