4. Team-mates Roland Linz, Martin Harnik and Ronald Gercaliu are all members of which nation’s Euro 08 squad?
5. The fixture Name the two international teams pictured below: 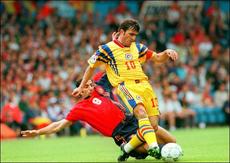 6. Who am I? I was born in France in 1965. I played in three European championship finals, winning one. I scored the World Cup’s first ever golden goal. I have played club football in France, Italy, Spain and England.