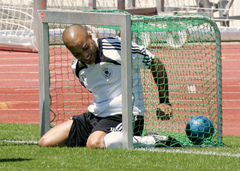 4. Team-mates Three players at Euro 2008 were taking part in their fourth Euro finals. One point for naming all three.
5. The fixture Name the two international teams involved: 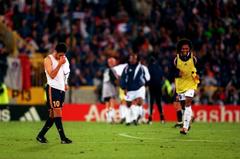 6. Who am I? I was born in 1984. I could have been a downhill ski racer, but chose football instead. My country has never lost a game in which I have scored. I am still involved in Euro 2008.

Answers:
1. Career path Oliver Neuville, German striker
2. Multiple choice b) Patrick Kluivert, in 2000, against Yugoslavia
3. Picture round David Odonkor, of Germany
4. Team-mates Lilian Thuram (France), Alessandro del Piero (Italy) and Edwin van der Sar (Holland)
5. The fixture Spain vs France, at Euro 2000
6. Who am I? Bastian Schweinsteiger, of Germany
How did you do?