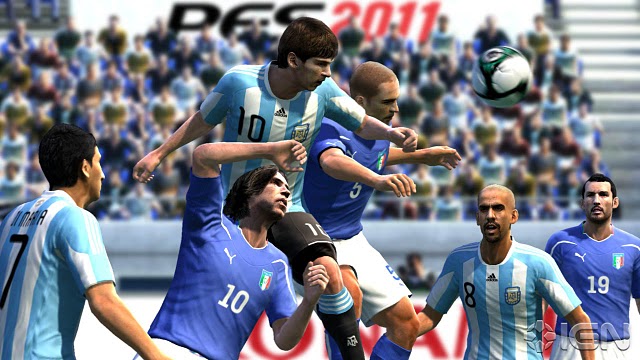 To win hearts, minds and market share, PES 2011 has to beat FIFA’s exemplar gameplay, licenses, commentary and online performance. Not an easy task.

In terms of gameplay, Konami has quite obviously adopted an ‘if-you-can’t-beat-‘em-join-‘em’ attitude for this season’s PES. The tricks and flicks in the new dribbling system are almost a carbon copy of those FIFA fans will be familiar with, and the general movement is also similar. With these additions you will no longer be a one trick pony and can really feel the weight of the players as you guide them around the pitch – even more so as they get tired towards the end of the game. Sadly though, the new system takes a long time to get used to and can feel sluggish.

The passing system has been completely revamped too. With a power gauge for every pass, you have a great deal more control over the ball. However, you don’t have complete freedom because passes are often restricted to linear paths. Sometimes this helps and sometimes it hinders. So, similar to the dribbling, the passing on PES 2011 takes getting used to, but, when you have given the game time and the penny drops, it feels very rewarding.

Other rewards are immediately available to the budding Jose Mourinhos out there. The depth to the tactics on PES is far superior to FIFA. A lot of thought has to go into them as well; a 1-0 lead will be pegged back as quickly as it appears if you do not protect that defence from a resurgent opponent. 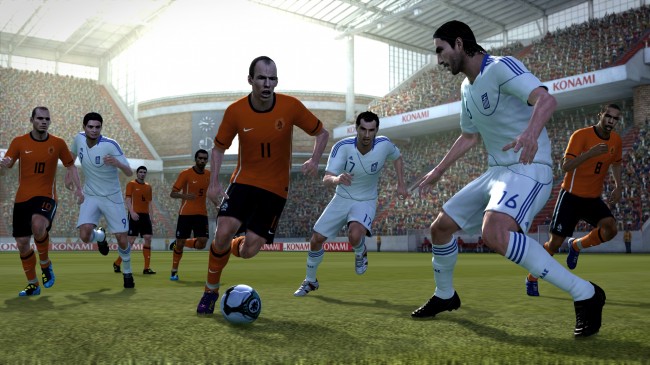 Although Konami has made great strides in improving the gameplay of PES, gamers are often hung-up about the superficial elements of the series that detract from the escapism it offers; the lack of licensed teams and players usually being the main grievance. Those players will be pleased to know that PES 2011 offers improvement on this front, with the addition of the Copa Santander Libertadores and the UEFA Super Cup. But, being as though the latter is just one game and the former is a Central and South American competition the majority of Europhilic players will be uninterested in, those improvements are simply not enough.

Commentary has improved insofar as Mark Lawrenson has been given the heave-ho, replaced by the much less annoying Jim Beglin, and John Champion now says things about the teams on the field. But that is it. So, yes, the commentary is still disappointing. As is the stadium atmosphere, which offers only a couple of chants for licensed teams that quickly become aggravating.

While obvious flaws are apparent in the game, Pro Evolution Soccer 2011 is a definite improvement for Konami’s well-loved series. It offers a realistic and engrossing experience of football. But it is still the inferior football game this year.