The latest PES was due to star Cristiano Ronaldo, not Lionel Messi, but the game’s developers haven’t figured out yet how to recreate petulance convincingly – it just comes out looking like sadness and longing. Hopefully someone at Konami will crack this code in time for PES 2011.
What do we know about the new version of Pro Evo, set to launch this autumn? Well, according to Konami it boasts “the most exhaustive raft of new features in the series’ history”. And about time too – Konami has been treading water with the last couple of versions (PES 2009 is really a pretty terrible game, it always pains me to say), so I really hope they are putting a lot more effort (like 200% more) into the next game.
Full preview of the game’s new features (with Pies verdicts) after the jump…

I know a hell of a lot of PES fans who have lost faith in the series – not that I’m convinced that EA’s FIFA series is a viable alternative; that game, even after several attempts to match Pro Evo’s realism, is the videogame equivalent of Jamie Redknapp’s punditry.
Here then is an official Konami statement on what PES fans – those of us who remain and are prepared to give the game one last chance -Â can expect:
Gameplay
“PES 2010 focuses on enhancing the excitement of matches between players, making for a truly challenging experience that will constantly test the player. Intuitive zonal defending will cover spaces and players need to look constantly for new ways to attack. PES 2010 focuses on being a real football simulation, as it requires both strategic play and quick reactions, as in real life. In addition to key out-field elements, goalkeepers are more versatile and with abilities matching those of modern shot-stoppers. The game’s referees have also been reworked, with smarter AI elements allowing them to make more balanced calls during matches.”
Pies says: God, I hope they fixed the keepers. And smarter refs would be nice; I always hated how the computer’s players would hardly ever be shown a card.
Improved Visuals
“PES 2010 has undergone a major visual revamp, with its celebrated player likenesses and animations now even closer to those of real-life players – including live player expressions to be depicted with an improved lighting system which differentiates between various conditions! Stadium detail is also massively improved, with the grass and other in-stadium elements finely depicted.”
Pies says: Graphics in a football game are really just the icing on the cake. Sure, FIFA has always looked nicer than PES, but it’s all about the three Ps: playability, playability and playability. But Pro Evo’s stadiums have always looked rubbish, so it would be nice to see this area addressed. 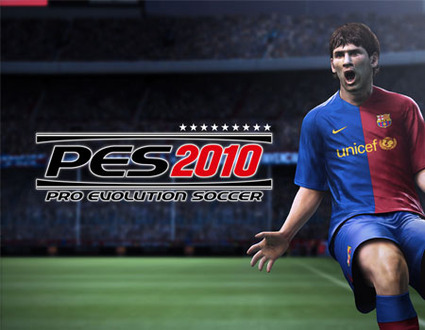 All-new animation and moves
Animations now dovetail into each other seamlessly, with dribbling and shots on goals worked into dribbling animations. More individual skills are also on show, including new flicks and tricks that have a definite showing on the way a game flows. Several elements have been completely reworked, with the dribbling, turning and kicking animations greatly enhanced, while there is a noticeable change in pace when a player passes a ball from a standing position than from within a run.
Pies says: All sounds promising. When you’re playing against a mate, the ability to pull off a variety of tricks (or “bullshit”) is vital. The more tricks, the longer the game’s disc will stay in my console’s tray.
Match-Day Atmosphere
Crowd reactions to the on-field action are now more varied, with all new chants and cheers. The subtle difference between Home and Away matches will be reproduced, and the crowd will react spontaneously to specific situations in a game, showing their disdain or pleasure as fouls are committed and goals scored. Likewise, the commentary has been altered to offer a fresher, more concise overview of the game.
Pies says: All-new chants! Wow, like I care about that, unless they take the time to tailor each stadia’s crowd so that you really feel sometimes like you’re playing in a cauldron-like atmosphere away from home. The commentary, however, is important. Pro Evo has long suffered from laughably bad commentary (stand up, Mark Lawrenson) so I hope they’ve ditched Lawro in favour of someone whose voice isn’t annoying. Hmm, can’t think of any pundits/co-commentators who don’t have annoying voices. Jim Beglin is OK, I suppose.
Enhanced Master League
Master League has been thoroughly renewed with the enhancement of managerial aspects, which enables users to enjoy managing a team for a longer career lifespan. Seen by many as a key contributor to the series’ success, the Master League elements in PES 2010 have been bolstered by far-ranging and vital new additions, dedicated to enriching the mode. Further details will be announced shortly.
Pies says: Much of Pro Evo’s longevity is down to the Master League feature. I’ve wasted too many hours of my life looking for talented young players with amazing development curves to sign (sad but true). In recent versions, ML has become very tired so I hope Konami has given it a much-needed makover. 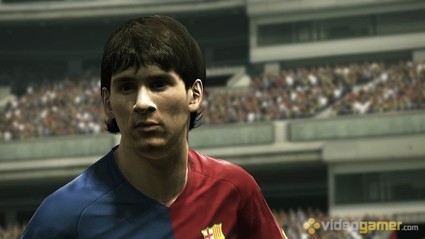 AI
The Tokyo team has worked to improve the AI of the game, with Teamvision 2.0 implemented. Midfielders and defenders now work together to cover open space and close down attacks, meaning that cover can be provided for lower-ranked defenders. This also has the additional effect of removing soft goals, thus returning PES 2010 to its simulation roots. In terms of attacking, players can also now move several players once, sending them into different areas, opening up more goal-scoring possibilities than ever before. As such, PES 2010 necessitates a new level of control from the player. Strategic thinking is as important as quick passing, but the new system greatly opens the way the player oversees control of the team. In free kick scenarios, for instance, players can now instigate the runs of the players awaiting the ball in the penalty area.
Pies says: AI is absolutely the most important part of a simulation videogame. Get it slightly wrong, as Konami did with PES 09 (it just felt wrong), and the game is ruined. I like the sound of providing cover for shit defenders, especially if it eliminates annoying “programmed” goals. (Cut in from wing, low cross, shoot etc.)
Individual Play Characteristics
In previous PES games, the team formation has determined the movements of the players. PES 2010 introduces a new system wherein the individual attacking and defending nature of the players is integral to the way they play. Each player enjoys unique AI tied into their best abilities, and is reflected in the actions of their team mates – i.e. if a player who is known to be a good crosser of the ball is in possession, more players will flood the penalty area to receive it. Similarly, if a player is known to be good with close control, defenders will work to cover their stronger side, while lone strikers will be automatically supported by midfielders on receipt of the ball.
Pies says: “If a player who is known to be a good crosser of the ball is in possession, more players will flood the penalty area to receive it.” I like the sound of this, a lot. Remains to be seen if it works in practice.
Strategy Use
A new power gauge system allows users to balance their strategy in a quick, but wide-ranging way before a match. Every element – pass frequency, movement, the line of defence, width of play, or the position of the front line – can be altered to match those of a favoured club: Juventus Turin are a dangerous side on the counter-attack, for instance, while FC Barcelona use width in their attack. These formulations can be altered at any point, too, with Home and Away matches forcing different circumstances on the user, as does the rigours of a Master League season.
Pies says: About time that the game reflected the different playing styles of Europe’s big teams. Juventus Turin though? Fail.
Penalties
An all-new system has been implemented, offering greater control, placing and accuracy.
Pies says: Good enough. Shooting on PES was often a seemingly random, hit-and-miss (mostly miss) affair.
Enhanced Online
A new dedicated section of the Tokyo team is committed to improving the online side of PES 2010. More downloadable content is also planned. Konami has supported PES 2009 with the release of new licensed teams, transfer updates, etc, and this support will grow for PES 2010. Team and content updates are planned throughout the game’s lifespan. These will make the game even more bespoke to the player’s match day needs.
Pies says: It’s impossible to overstate just how shit Pro Evo’s online mode has been, so things can only get better (I hope).
Rights
Konami has strengthend its relationship with UEFA and can announce it has secured the exclusive video game rights for the Europa League Licence (formerly known as the UEFA Cup). In addition Konami will be enhancing and developing the use of the UEFA Champions League within PES 2010 to make even better use of the best club football competition in the world.
Pies says: The Europe League? Hmm, not so interesting. Still, any improved rights can only be a good thing, even if FIFA still holds all the aces.
Overall verdict: Konami talks the talk, and a lot of the new stuff seems to address the game’s problem areas. I really, really hope the actual game lives up to the press-release hype. If not, I’m through with PES.