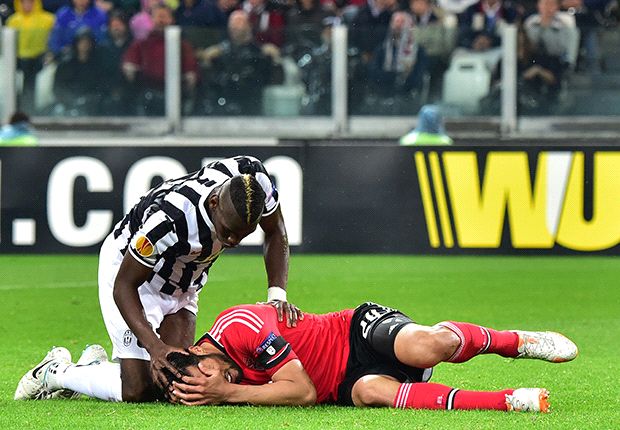 Benfica secured themselves a place in the Europa League Final with a spirited defensive display in the second leg of their semi against Juventus, keeping the Italian side at bay all evening and just about protecting the 2-1 lead they took into the tie from the first leg in Portugal.

Ezequiel Garay proved a central figure in the shut-out with a manful performance at the back, but the Argentinian centre-half didn’t quite last the distance – having to be subbed off for the last five minutes after Paul Pogba mashed his lips to a pulp when an attempted overhead-kick went south…

Ouch. Garay then left the field on a stretcher with blood pooling in his mouth, though, like all the best action heroes, it appears that the wound was only superficial.

In fact, the aftermath was captured in the dressing room after the game by Garay’s team-mate Andre Gomes…

Cheer up Chuck, you’re in the final!