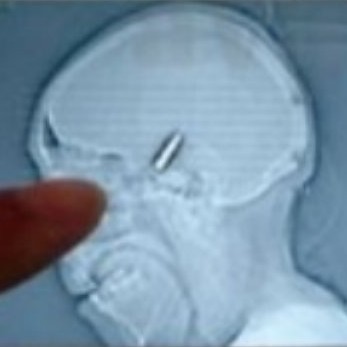 An amateur goalkeeper turning out in a local game in the Sarajevo neighbourhood of Boljakov Potok had to be taken to hospital afterwards after unwittingly playing for the majority of the game with a bullet lodged in his brain.

Quite how you can unwittingly have a bullet in your skull is beyond us.

Anyway, Dusko Krtalica, 51, started experiencing “headaches” early on in the game which he assumed were a direct result of him knocking his head against the goalpost while diving to make a save. After somehow making it through to full-time, Krtalica then began complaining of numbness in his left arm and the slurring of his speech.

According to Serbian daily paper Kurir, he was immediately rushed to hospital for tests before being transferred to the Department of Emergency Medicine Hospital in Kosovo for an x-ray (see above) only for doctors to find that he had a bullet burrowed deep in his temple.

Police reckon the bullet that hit Krtalica in the side of the head fell from the ether after being fired up into the air in celebration at a nearby wedding, as 12 other spent bullets were found in the area around the pitch. A 42-year-old man from the Boljakov Potok neighbourhood has since been arrested, with a 9mm pistol seized.

Krtalica is still being held in hospital while he recuperates but according to a spokeswoman for Clinical Center of the University in Sarajevo, for a man who’s had a foreign object removed from the head his “vital signs are stable.”

How about that? Madness gone mad, no?