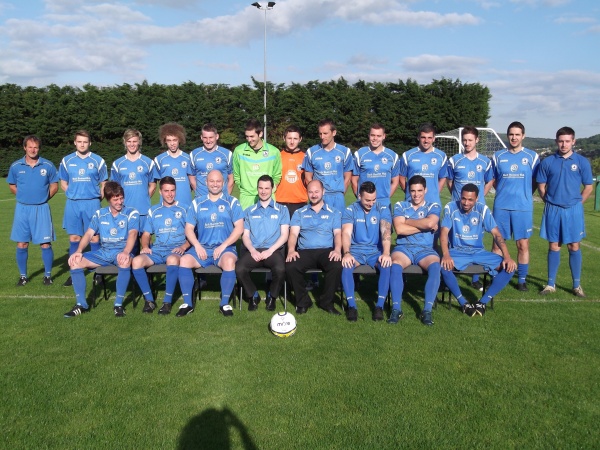 A non-league football manager who spent a week in an induced coma after being involved in a horrific car crash on his way home from work opened his eyes for the first time after being told his team, Larkhall Athletic FC, had won.

Wayne Thorne (who you can see up there, bottom row, fourth from the right) had just begun his second year in charge at Larkhall when he suffered a ruptured artery in his heart, 16 crushed ribs, a punctured lung, a broken sternum, a dislocated and broken hip and pelvis and – and – a fracture below his left knee in a head-on collision.

Doctors put 33-year-old Wayne into a coma after he underwent multiple operations (including major heart surgery) but opened his eyes for the very first time when his brother visited him in hospital and updated him on Larkhall’s results at his bedside:

“Football and sport and being active, that has been his life, so when he was in his coma we were told to talk to him.

“On the first Saturday, Larkhall had a game and me and his brother told him the score and he opened his eyes.

“I know studies have shown that they can hear you and me and his brother truly believe he heard us. It was brilliant to see, because he absolutely loves his football and is so dedicated to Larkhall Athletic.”

Also speaking with the Chronicle, Wayne himself thanked all his friends, family and well-wishers for their vigilant support during his recovery from what is a seriously horrendous array of injuries, but Larkhall weren’t far from his mind, ending his multiple thank-yous by saying he hopes the club can get a “good local attendance behind the lads next Saturday for the FA Cup tie against Tiverton.”
That, good people, is dedication!