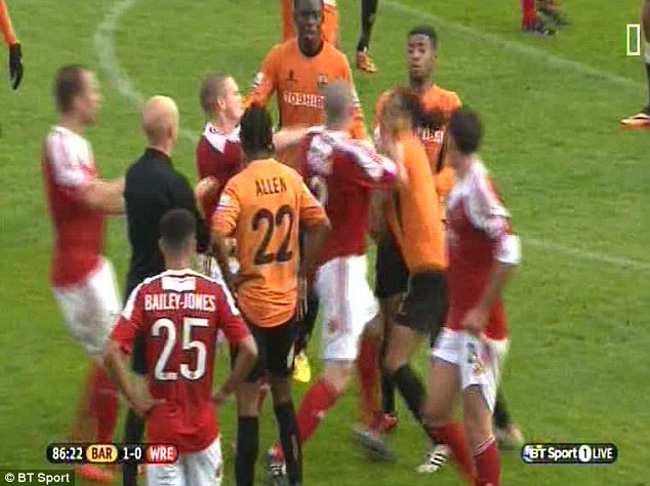 A genuine, proper footballing legend, Edgar Davids continues to make the headlines, albeit in the lowly environs of non-league football. As player-manager of Barnet, the Dutch star picked himself to play a centre-half role against Wrexham on Sunday. However, the veteran superstar’s day would end in an early bath after a dramatic finish to the game.

With the Bees leading 1-0 late on, Davids was slow to ive the ball back to Wrexham after the Welsh side had been awarded a free-kick. Stephen Wright tried to wrestle the ball out of Davids’ hands, only to receive a swift elbow to the face as a massive bawl ensued.

Davids, who had been wearing the no. 1 jersey, was sent off along with Wright before Dean Keates scored for Wrexham from the subsequent free-kick.

But that wasn’t the end of the drama. with Johnny Hunt launching a wild, flying challenge in the direction of Curtis Weston, which reportedlt broke the Barnet player’s leg. Hunt was, not surprisingly, sent off, while  Wright, the victim of the Davids’ elbow, apparently now needs a skin graft. Crazy!

The photos come courtesy of the Daily Mail, via BT Sport, by the way!