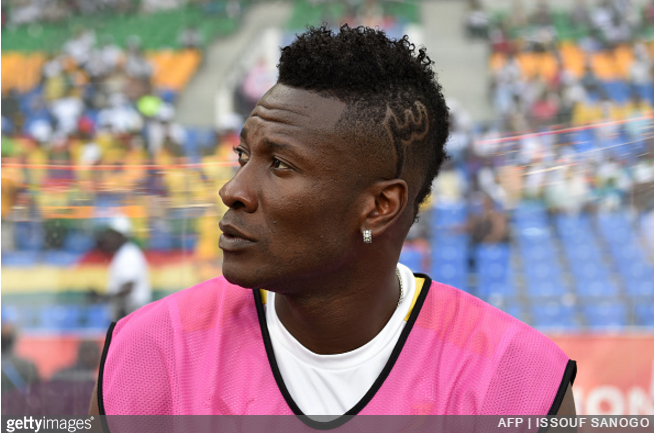 Asamoah Gyan is one of 46 players deemed to have “unethical hair” according to the United Arab Emirates Football Association (UAEFA) guidelines.

As per BBC Sport, Gyan, who currently plays for Al-Ahli in Dubai, is guilty of sporting a ‘Qaza’ barnet, which are forbidden by some of the stricter strains of Islam adhered to in Saudi Arabia.

Some Islamic teachings ban ‘Qaza’ hairstyles, which include mohawks, because only part of the head is shaved, leaving other parts unshaven.

The furore surrounding “over-exuberant” Qaza hairstyles cropped up in football not so very long ago, when a referee forced Al Shabab goalkeeper Waleed Abdullah to shave his head before a match in April of 2016.

UAEFA Disciplinary Committee deem that Omar Abdulrahman’s haircut does not fit the new criteria for ethical haircuts in the #AGLeague. pic.twitter.com/giURsG1xxI

This comes after a new law by the UAEFA which states that players have to abide by certain guidelines for haircuts. #AGLeague

46 other players in the #AGLeague, amongst them Leonardo and Asamoah Gyan, were also amongst the list of players who had unethical haircuts. pic.twitter.com/ugGh8oTLq4

Official: Omar’s hairstyle is exempt from new law, despite other players in the league with similar hairstyles having to abide by it.

On the left: Omar Abdulrahman exempt from haircut law.

On the right: Suhail Al-Mansoori of @AlWahdaFCC before he had to cut his hair. pic.twitter.com/20oE0g2Frg

Basically, they’re making it up as they go along.