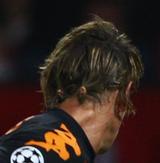 Roma’s uncompromising central defender trapped in the body of a beach bum, Philippe Mexes, has Horror Hair at the best of times. The Frenchman’s greasy, peroxide-tinted long locks have been featured on Pies before. But last night’s match against Manchester United revealed a cheeky little addition to his barnet, which pushes him further up the Horror Hair stakes: pig-tails. Yes, Philippe now has little tiny girls pig-tails incorporated into his nasty hairdo.