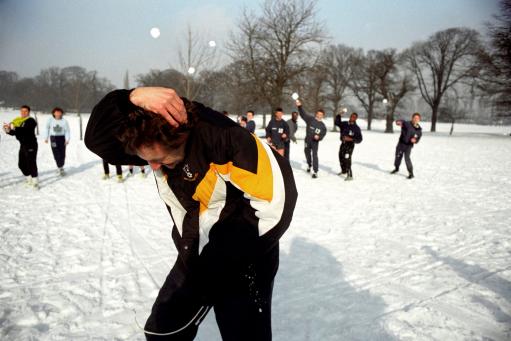 If you’re going to throw a snowball, throw it at Neil Warnock

With things already a bit on the nippy side over there, the Bulgarian top flight derby clash between Levski Sofia and CSKA Sofia on Saturday afternoon was enveloped in snow…AND CONTROVERSY!

CSKA eventually ran out as 0-3 winners, though the game was marred by an incident that saw the visiting team’s coach, Stoycho Mladenov, reportedly “knocked unconscious” by a snowball thrown by a Levski fan.

“They (Levski fans) began to throw snowballs at us from the start of the game,” grumbled CSKA assistant coach Anatoli Nankov after the game.

“We informed the fourth official but he said that their behaviour was normal.”

Mladenov collapsed after being hit by the snowball during the early knockings of the game and later claimed himself that the wintry projectile had knocked him out – adding that he had a medical document to prove as much and that he was willing to submit it to the Bulgarian Football Union (BFU) if requested to do so.

However, the Levski fans were unconvinced by Mladenov’s performance, criticising the CSKA coach for his theatrical reaction after being hit.

“Children play with snowballs but I haven’t heard of anyone who has collapsed,” said Vladimir Vladimirov, head of Levski’s national fan club.

“It was disgusting to watch, his over-acting was so poor.”

The BFU’s disciplinary committee have since announced that they plan to discuss the snowball incident on Tuesday…presumably without descending into a fit of giggles.