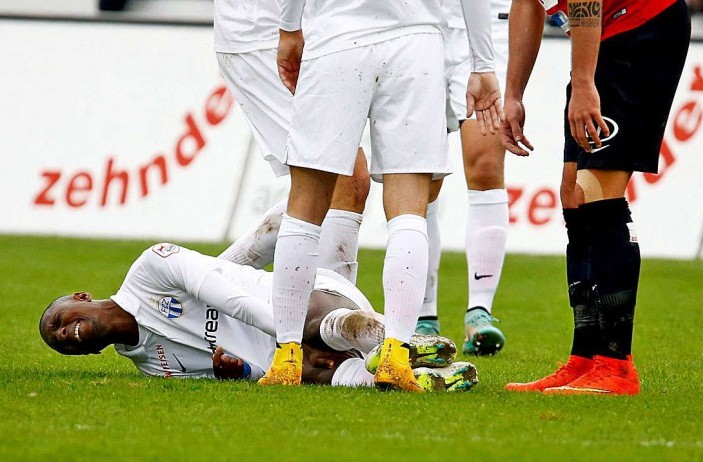 Swiss side FC Zurich have filed a criminal complaint against Aarau midfielder Sandro Wieser for a horror tackle during a match between the two sides last month that left Zurich striker Gilles Yapi Yapo with what might turn out to be a career-ending injury.

Zurich have issued a statement to announce that they have asked the public prosecutor of the Lenzburg-Aarau region to consider bringing charges of assault against Wieser, having previously begun legal proceedings against him in November.

The hideous challenge happened during Zurich’s 1-0 Swiss Super League win over Aarau, with a brutal stamp from Wieser leaving Yapi Yapo with – according to his club – a torn anterior and interior cruciate ligament, serious cartilage damage, a meniscus tear, a torn kneecap and deep bruising in his thigh.

Consider this your warning: it ain’t pretty…

Former teammates together at Basel, Lichtenstein international Wieser, 21, later publicly apologised to Yapi Yapo after receiving a six-match ban for the foul from the Swiss FA.

“I totally regret what happened,” Wieser said via his personal Facebook page.

“There was absolutely no intent on my part. I’ve had a lot of experience with injury, and I don’t wish that on anyone.”

As for Yapi Yapo, it’s reportedly looking likely that he will never make a full recovery – with several sources suggesting the 32-year-old former Ivory Coast striker will be forced into early retirement.