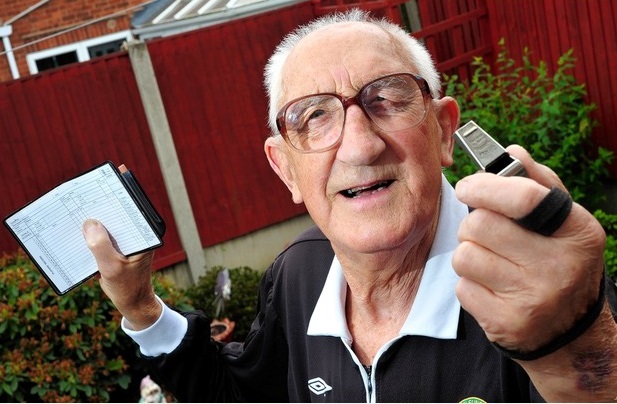 We never thought we’d live to see that day, but it would appear that Britain’s most senior referee, Harry Hardy, is set to hang up his whistle and call it a day.

Sadly, 88-year-old Harry fell and injured his hip recently, admitting that it “feels rotten” but he may have to knock refereeing on the head after overseeing well over 3,000 matches since he started out in 1959.

[I twisted my hip] thinking I’m 28, carrying a load of stuff up the stairs.

It’s put me out of any game for a little bit.

Speaking as somebody who has had the immense pleasure/frustration of playing in many, many games refereed by Old Harry over the years, ’tis truly a bleak day in the world of Erewash Sunday League football.

Not that his hard work has gone unnoticed, with the FA awarding Harry a medal for his services to football in 2013 and Prince William bestowing him with a British Empire Medal in the Queen’s Birthday Honours the year after that.

God bless him, even if he is a Derby County fan.